Project coordinator of the Hydrocarbon Pollution Remediation Project (HYPREP), Ferdinand Giadom, has announced plans to establish a specialist hospital in Ogoniland, Rivers State, to provide quality healthcare services to the people of the area. 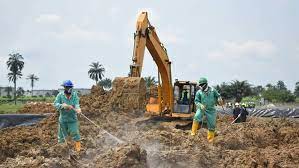 He told stakeholders at the meeting that the Federal Executive Council has approved the project, noting that the hospital will be sited at Tai Local Government Areas of the state.

He explained that the specialist hospital would have modern facilities with bio-data transmission and telemedicine, as diagnosis will be done with international standards, while drugs will be provided according to the ailments.

The project coordinator maintained that the stakeholder engagement was necessary to brief the opinion leaders on the current development of the smooth take-off of the national grid. He solicited community corporation and collaboration where the electricity tower will transverse, saying that the Ogoni Power Project will be a catalyst for both economic empowerment and prosperity.

Giadom stated that the design is ready with the provision of 13 injection stations, 33 KVA and 11 KVA for step down with three high tension towers and two sub-stations, noting that the protection of these government facilities was key.

He stressed that other activities of HYPREP, such as the remediation of the complex sites, Ogoni film industry, and aviation training would commence soon.

Thomas Bariere, who responded on behalf of the two LGAs, said the local government councils would sensitize the various communities that will host the power project, noting that the importance of electricity cannot be down-played.

In an interview shortly after the event, His Royal Highness, Kadilo Kabari, natural ruler of ancient Barako community, commended HYPREP for its doggedness in planning to electrify Ogoni area for economic and social transformation.

He appealed to community leaders to donate their lands where necessary and cautioned the youths not to stand as bottlenecks to the realisation of the project.