Ibom Air, the Nigerian carrier owned by the subnational government of Akwa Ibom State, has ordered 10 A220 aircraft with Airbus, the European plane manufacturer, during the ongoing Dubai Air show, at the purpose-built DWC event arena in Dubai, United Arab Emirates (UAE). 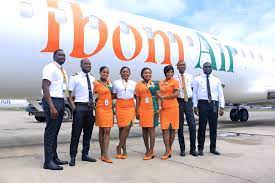 The aircraft order agreement signed by Mfon Udom, the chief executive officer of Ibom Air, and chief commercial officer of Airbus, Christian Scherer, was witnessed by the Akwa Ibom Governor, Udom Emmanuel.
Ibom Air began operation in 2019 as a state run airliner, with the objective to cover passenger airlifting of the Nigerian south-south and south-east regions, as well as the regional aspiration of extending to the Central and west coast of Africa. These include countries like: Cameroon, CAR, Congo, Gabon, Gambia, Liberia, among many others.
Uko Udom, a senior advocate of Nigeria (SAN) and Akwa Ibom State attorney-general and commissioner for justice, and Imoabasi Jacob, the chairman of Ibom Air, led the Ibom Air team, comprising the airline’s chief operating officer, George Uriesi, the group manager, marketing and communication, Aniekan Essienette and the group manager corporate services, Imelda Aba, were also on the entourage.
The airline’s group manager marketing and communication, Annie Essienette, announced in a statement that, working in collaboration with the Airbus team, Ibom Air took an innovative approach to making the choice of the A220.
The airline started by wet-leasing two A220s for a year, to test the suitability of the aircraft for their needs.
Within six months of this process, the airline was able to validate the A220 as the right choice for its domestic and regional aspirations.
The domestic airliner said the order of 10 Airbus A220 is in line with its aggressive growth plan, which will see it expanding its footprint into new domestic routes, as well as regional routes covering West and Central Africa in the immediate future.
The first phase of this expansion is set to cover cities like Malabo, Douala, Libreville, Kinshasa, Accra, Abidjan, Freetown, Banjul and Dakar.
Ultimately the airline intends to operate throughout the continent of Africa.
The all-new A220 is purpose built for efficiency, targeting the 100-150 seat market. It burns 20 percent lower fuel per seat compared to previous generation aircraft; and flies to a range of up to 3,400 nm (6,297 km), offering performance similar to larger, single-aisle aircraft.
Businessamlive Website Stats