Due to pervasive data shortages, accurately determining the size of subnational revenue gaps is challenging. However, there is no denying that subnational governments in Nigeria are grossly inefficient in exploiting their fiscal capacities, which invariably speaks volumes about their huge revenue gaps. Using the NBS 2020 data on states’ IGR and the 2017 nominal GDP, we found that the average IGR-to-GDP ratio in 22 states, excluding Lagos, was 1.1%. Rivers State has a ratio of 2.3%, while Ondo and Bauchi States have 0.8% each. Oyo and Zamfara States have 1.5% and 1.7%, respectively. If we use an IGR/SGDP benchmark ratio of 10%, the gap is approximately 89%. In addition to the  IGR-to-GDP, the high levels of tax evasion at the subnational level also lend credence to this enormous revenue gap. For instance, in a 2020 paper titled, “Tax Evasion and Government Revenue Generation: Evidence from the Selected States in Southwest Nigeria,” published in the International Journal of academic management sciences research, the authors, Folayan Olubukola Aina, Dosunmu Modupe Adeolu, Amusa Amidu Ajani, utilising data from National Bureau of Statistics, Office of Budget and Economic Planning, and several states internal revenue offices, between 2011 and 2018, showed that the ratio of evaded taxes to estimated tax revenue in many states in the South West geopolitical zone is equally high and averages 55%. The evasion rates are as follows: Oyo (70%), Lagos (20%), Ondo (38%), Osun (85%), and Ogun (62%). This pattern will likely not differ much across most of the country’s states and local government areas. 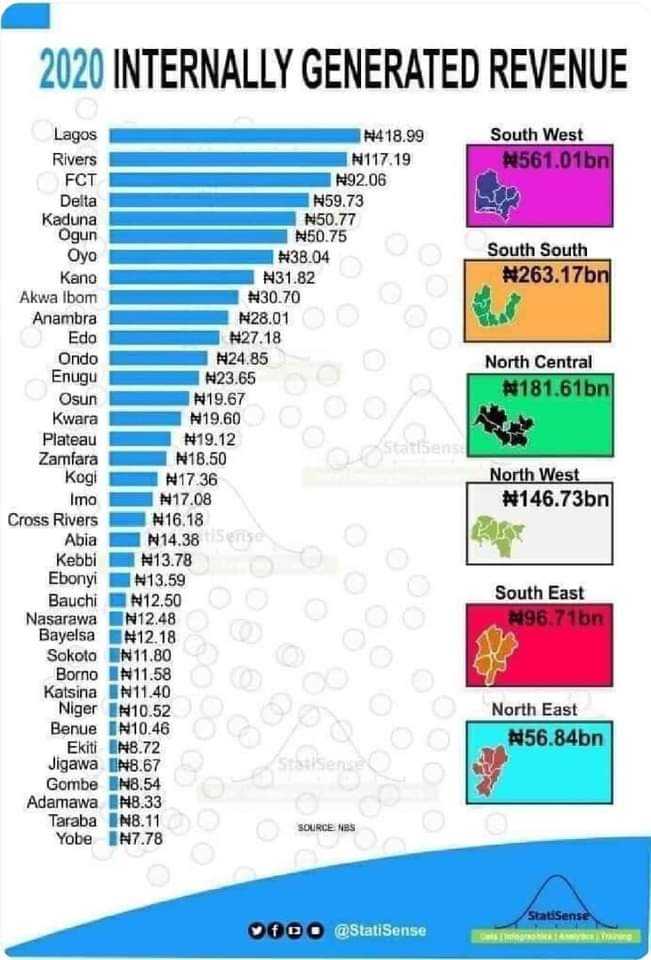 But the considerable difference in tax evasion rates between the two neighbouring states of Oyo, Ogun, and Lagos, for instance, is instructive and demonstrates how much impact automating collection processes, improving sector formalisation, and enhancing collection institution capacity can have on tax and overall revenue efforts. Regardless of its unique advantages and capabilities, Lagos State is still the leader in independent revenue expansion strategy implementation compared to all subnational governments in Nigeria. It is also far ahead of several other states regarding revenue efficiency or value for money. Lagos State has partially sustained its IGR leadership because it makes efforts to improve the quality of governance that it offers its residents. In general, tax and non-taxpayers are naturally interested in knowing how the compulsory monetary payments they make to the government contribute to their well-being.

Most rational individuals would rather not pay taxes if it is possible. The consolation, however, lies in the promise of good governance made possible by the mobilised revenues. Impliedly, all things being equal, the more the mobilised income, the better the quality of good governance that is possible and available to the citizens. In many instances, taxpayers’ compliance levels, including massive evasion, largely depend on governments living up to these promises. Citizens trust the government more when they perceive policymakers and managers as substantially accountable and delivering on critical well-being articles, such as the ease of doing business, security and justice, and critical public infrastructure. Beyond the perception of accountability and prudent utilisation of publicly owned financial resources, the actual reductions in the cost of living due to enhanced good governance make the case for paying taxes more compelling. For instance, residents in a state where households pay up to N30,000 each month to buy water from water tankers would be willing to pay their taxes if convinced that their government would be favourably disposed to put functional, cheaper, and adequate water schemes. Many subnational governments also understand this thinking and have built some tax campaigns on “tax for service.”

Subnational revenue efficiency, therefore, measures how well a state or local government manages its mobilised financial resources to produce the highest possible level of well-being for the citizens. This performance estimation is comparable to measures of efficiency in corporate financial management, which comprises such metrics as return on equity or return on investment. Citizens of local and state governments consider their tax and non-tax payments, including other collectively owned resources, as their investments. Policymakers, particularly those overseeing the performance of government revenue, rarely study the extent to which changes in earned income or mobilised resources of the state translate to improvements in their economic well-being. It is undeniable that economic activities in states and local governments will continuously blossom if managers of governments’ resources judiciously utilise them to provide entrepreneurship-supporting public goods, the rule of law and just society, and improve the ease of doing business. Therefore, the measurement of revenue performance should not only be through growth sizes but mainly through the revenue elasticity of the citizen’s prosperity which shows the extent to which the latter changes as a result of changes in the former.

Although the IGR elasticity of citizens’ welfare or good governance is a significant source of the revenue gap, it interacts with at least five other essential factors. The first is the effectiveness of revenue collection administrations, which largely depends on the quality of deployed collection infrastructure and the human capacity operating them. Every good entrepreneur knows that staying in business requires ploughing back a meaningful proportion of their earned income in critical operational infrastructure. Similarly, subnational governments must do the same, particularly in their machinery for revenue collection. Many revenue collection institutions at the subnational level, particularly the local government, do not even have well-functioning computers, not to talk of applicable software and adequately trained personnel to utilise those machines for enhanced collection. Therefore, reinvesting a small fraction of previously collected revenue in some of these critical work infrastructures will improve the working conditions and the eventual output (more revenue). However, some states claim to and retain 10% of collected funds with their IRS. Nevertheless, in many of them, the infrastructure on the ground always betrays such claims.

The second factor is the low tax and non-tax filing levels, which interconnect with at least four other elements. These associated elements comprise a colossal size of the shadow economy, somewhat elevated compliance costs primarily not favouring law-abiding tax and levy payers, levels of improvement in supporting technological infrastructure of revenue collection institutions, and tax evasion. Low levels of conviction about the government’s sincerity in growing the return on citizens’ tax payments (or IGR) and perceived high levels of government interference in economic lives have driven many to operate their businesses underground. The informal sector is enormous mainly because many citizens do not want the government to have meaningful clues about their operations. Again, the financial costs and inconveniences required to comply, particularly in some states and local governments that have not adequately digitised their payment operations, can be elevated. There are instances where transport costs to revenue collection centres are more than three times the amount eventually paid. But supporting technological infrastructure, mostly lacking in many of these offices, should ordinarily reduce this burden.

Thirdly, the vast revenue gap at state and local government levels is also a consequence of the massive underreporting of tax and non-tax payment obligations and the underpayment of reported obligations. Despite the lack of substantiating data, it is arguable corruption risk exposure of revenue collection agencies at the subnational level exceeds that of the centre. Underreporting challenges faced by the subnational IRS are well-established. Revenue collection officers in criminal conspiracy with taxpayers typically perpetrate this unacceptable behaviour. However, the mechanism for committing this flipside crime, namely the underpayment of accurately reported tax and non-tax obligations, is the same, although the taxpayer is more culpable in this instance. In addition to the above are the revenue leakages from the government, low fiscal capacity exploitation, and poor secondary and tertiary sector development. Revenue efficiency requires the government to invest in the proper technological infrastructure and collection processes to check financial leakages. It also demands that the government provides the base infrastructure and sometimes directly intervene to structurally expand secondary and tertiary sectors and overall revenue collection prospects. A closer inspection of revenue productivity indicators presents exciting insights.

As of 2020, only nine out of 33 sampled states (i.e. 28%) have an IGR per capita above the national average of N5,776.59. With an IGR per capita of N44,355.29, states like Lagos are on a polarised extreme of Imo State with N1,382.31. States like Zamfara, Jigawa, and Kebbi, with more than N3,000 IGR per capita, outperformed backbenchers such as Benue, Katsina, and Imo States. Focusing on the relative share of IGR per capita tells a better story of the potential impact of a theoretically redistributed subnational IGR. IGR leaders such as Lagos and Rivers States continue to maintain a lead. Again, a cursory investigation of the higher short-term responsiveness of HDI and the standard of living in various states to their IGR shows that none was elastic between 2019 and 2020. The ratio of the percentage change in HDI and standard of living in the 31 states sampled to their corresponding percentage changes in the IGR within the same period was less than 1 for all of them. Although this analysis had many limitations, such as not recognizing the reasonable time for fiscal transmission effects and the damaging effects of COVID-19 the same year, it reveals how poorly the large net amounts collected in the same period could not significantly deliver net well-being. Clustering the states based on standardised HDI, IGR, and IGR per capita values in 2020 showed that the states with above-average performance in IGR and IGR per capita also performed above average in the human development index. Lagos, Rivers, Ogun, Benue, and Delta States all fall within these clusters. Bauchi, Gombe, Jigawa, Katsina, Kebbi, Sokoto, and Yobe States performed below average in per capita GDP and IGR and very severely in the HDI measures.

Finally, prudently utilising independently generated revenue of subnational governments to orchestrate good governance raises citizens’ perception of accountability and trust in government. Good governance, in turn, affects compliance costs and, together with the perception of responsibility and heightened confidence in the government, creates positive effects on payer attitudes. Ultimately, it results in the minimization of tax evasion and revenue gaps.