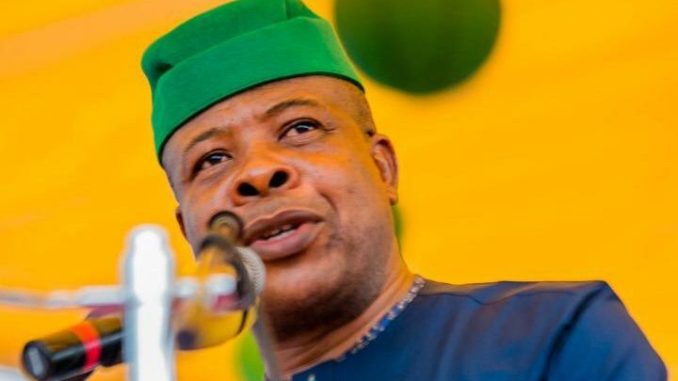 By Dikachi Franklin, in Owerri.

The signing into law of these bills has brought the number of bills he has signed into law to eleven since he was sworn into office on May 29, 2019

The three laws can be cited as: Imo State Hotel Occupancy and Restaurant Consumption Tax Law No.35, of 2019, Imo State Signage and Advertisement Agency (Establishment) Law No.36 of 2019 and, Employment and Empowerment Trust Fund Law No.37 of 2019.

Performing the signing of the bills into laws at the Sam Mbakwe Expanded Executive Council Chambers, Ihedioha gave details on the significance and benefits of the law.

He said the Imo State Hotel and Occupancy and Restaurant Consumption Tax Law No.35 of 2019 was aimed at sanitizing the consumer sub-sector of the tourism sector in the state with the intent of boosting revenue of the state for its overall development.

He noted that this law is not designed to tax Imo citizens arbitrarily but to place minimal tax on tourists coming into the state with a view to generating revenue for the development of the tate.

But business a.m. investigations revealed that the members of the Imo State Hoteliers Association (ISHA) differ on the implementation of the new law.

They argued that they were not duly consulted before the law went to increase the price of wine, liquor, spirits, cigarettes, tobacco, jewels and jewelries, perfumes and cosmetics sold to their customers.

Those who spoke on condition of anonymity said, “now that the state government would use our members and our establishments as tax collectors, what is our share or compensation for working for the government?”

They also argued “hotels and restaurants owned by serving government officials do not pay taxes even hotels owned by the state government do not pay, and as a result, there would be problem of getting full compliance,” they maintained.

On the Imo State Signage and Advertisement Agency (Establishment) law, he said it does not seek to establish an agency on advertisements, but to streamline and regulate indiscriminate display of signs and advertisements across the state.

According to the governor the laws are geared towards improving the state and the well-being of the people.

He commended the members of Imo State House of Assembly for being proactive.

“Eleven bills passed into law by the House of Assembly within a period of six months is a major accomplishment. Many Houses of Assembly may not pass eleven bills into law in four years,” he said.

He urged the speaker and his colleagues to maintain the spirit with a view to accelerating the rebuilding process, which according to him, “is already yielding significant results”.