The International Monetary Fund (IMF) has revised Nigeria’s 2021 economic outlook from 1.7 per cent that it earlier projected last year to 1.5 per cent in its update report recently released. 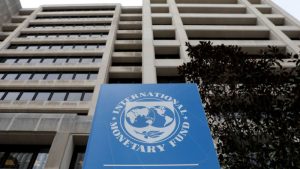 But for its expected 2020 closing economic performance for Nigeria, the IMF said the grim -4.3 per cent it had estimated will now see the economy close at -3.2 per cent on the back of low oil prices, reduced production under the Organisation of Petroleum Exporting Countries and other major oil producers (OPEC+) agreement, and declining domestic demand from the lockdown.

For its 2021 global forecast, the Bretton Woods institution said it has revised that upward by 0.3 percentage point relative to the previous forecast, reflecting expectations of a vaccine-powered strengthening of activity later in the year and additional policy support in a few large economies.

The projected growth recovery this year follows a severe collapse in 2020 that has led to adverse impacts on women, youth, the poor, the informally employed, and those who work in contact-intensive sectors, the report stated.

But a global growth contraction for 2020 is estimated at -3.5 per cent, 0.9 percentage point higher than projected in the previous forecast as it reflects stronger-than-expected momentum in the second half of 2020.

The IMF noted that the strength of the recovery is projected to vary significantly across countries, depending on factors such as, access to medical interventions, the effectiveness of policy support, exposure to cross-country spill-overs, and structural characteristics entering the crisis. This could be seen in the instance of the South Africa outlook which 2021 economic projection fell to 2.8 from 3.0 in 2020.

From the global outlook, following an estimated 3.5 per cent contraction in 2020, the global economy is projected to grow 5.5 per cent in 2021 and 4.2 per cent in 2022 in contrast to the estimate for 2020 which is 0.9 percentage point higher than projected in the October WEO forecast. This reflects the stronger-than-expected recovery on average across regions in the second half of the year, the IMF report shows.

Similarly, the 0.3 percentage point growth forecast for 2021 as revised up, reflects the additional policy support in a few large economies and expectations of a vaccine-powered strengthening of activity later in the year, which outweigh the drag on near-term momentum due to rising infections. The upgrade, according to the report is particularly large for the advanced economy group, reflecting additional fiscal support – mostly affecting the United States and Japan – together with expectations of earlier widespread vaccine availability, compared to the emerging market and developing economy group.

In addition, following the recovery in global activity, global trade volumes are viewed to grow about 8 per cent in 2021, before moderating to 6 per cent in 2022, while services trade is expected to recover more slowly than merchandise volumes, as it is consistent with subdued cross-border tourism and business travel until transmission declines everywhere.

Furthermore, as a result of negative output gaps, inflation is expected to remain subdued during 2021/2022. Seemingly, despite the anticipated recovery in 2021/2022, output gaps are not expected to close until after 2022. In advanced economies, it is projected to remain generally below central bank targets at 1.5 per cent. Among emerging markets and developing economies, inflation is projected at just over 4 per cent, which is lower than the historical average for the group.

As a metric to fostering recovery, the IMF recommends strong multilateral cooperation to bring the pandemic under control everywhere. Such efforts include, ensuring universal distribution of vaccines, bolstering funding for the COVAX facility to accelerate access to vaccines for all countries as well as facilitating access to therapeutics at affordable prices for all.

Importantly, many countries, particularly low-income developing economies, entered the crisis with high debt that is set to rise further during the pandemic. This implies that the global community will need to continue working closely to ensure adequate access to international liquidity for these countries. Where sovereign debt is unsustainable, IMF recommends that eligible countries should work with creditors to restructure their debt under the Common Framework agreed by the G20.