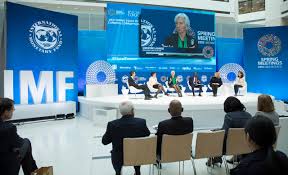 The International Monetary Fund (IMF) is recommending closer and stronger ties amongst countries of the world so as to stem the tide of rising economic crisis.

Christine Lagarde, the IMF director during her opening remarks at the 2018 IMF/World Bank annual press conference Thursday in Bali Indonesia said, economies will need stronger international cooperation because the global economy is strong, but it probably is not strong enough.

According to her, the IMF clearly sees that growth has plateaued and expect global growth to remain at 3.7 percent for three years in a row (2017-19).

“We also see that growth is spread more unevenly among countries. Moreover, some of the risks that we have highlighted, particularly at our Spring Meetings in April, have now begun to materialize, especially from rising trade barriers.

If these tensions were to escalate, the global economy would take a significant hit,” Lagarde warned.

Lagarde noted that the IMF is strongly recommending a de‑escalation of these tensions and work toward a global trade system that is stronger, fairer, fit for purpose, and fit for the future.

Responding to whether the global economy is “safe enough”, Lagarde pointed out that “the bottom line is this: ten years after the global financial crisis, we are safer, and measures have been taken, but we are not safe enough.”

Adding that “with global public and private debt at an all-time high, any slight change in the wind could provoke capital outflows and economic instability in emerging markets, as we see in some of those markets.”

To guard against this, the IMF’s recommendation is to encourage countries to use the right combination of domestic and global policies.

“We also need to press ahead with the financial regulatory agenda—and resist backsliding. There has been a lot of progress over the past decade, but also an unfinished agenda—combined with the added challenges from continued financial innovation, which has its upside but also its downside.”

She said a safer global economy also means tackling the issue of sustainability, including the existential threat of climate change.

“We know from our work done last year, especially in the World Economic Outlook, that low‑income countries and low‑lying countries are the first victims of climate change. And we know, based on the new report from the UN Intergovernmental Panel on Climate Change, that time is of the essence and that we cannot afford to waste it.”

Lagarde further noted that the benefits of stronger growth are not shared enough for the global economy to continue to grow in a sustainable way.

She said the IMF’s research has shown that excessive inequality, whether caused by technology, trade, global integration, or policies favoring capital over labor, is magnifying economic and social tensions, especially in advanced economies.

She thus urged global economies to use the current growth momentum, (“because we still have it”) to implement the right policy actions in the areas earlier outlined, so as to be able to achieve the goals set out for global economic prosperity.