Nigeria’s currency woes and its long strangulating dependency on imports are the outcomes of an International Monetary Fund (IMF) orchestrated structural adjustment programme (SAP) implemented in 1986 by the military government of Ibrahim Babangida, the country’s central bank governor, Godwin Emefiele, has said. 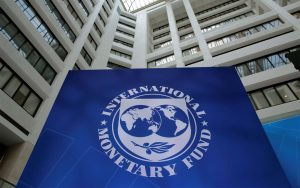 The SAP contributed immensely to the devaluation of the domestic currency, the naira, Emefiele said at the official launch of the e-Naira by President Muhammadu Buhari at the State House in Abuja, the capital city.

He said the naira’s value has been on a downward trend since the advent of the International Monetary Fund (IMF) led Structural Adjustment Programme (SAP) in 1986, which led to the introduction of the Second Tier Foreign Exchange (SFEM) market in the country.
Speaking on the direction of the exchange rate, Emefiele expressed regrets that the naira has been on a one-way free fall from parity to the US Dollar in 1984 to over N410 per dollar today owing to the failure of the SAP project.

“Some 35 years later, we have not been able to achieve the many promises and objectives of that programme. Instead, what we have seen is widespread import dependency, which has wiped out most of our production and manufacturing bases and exported all our jobs in the process,” he said.
The CBN governor regretted the decline of the country’s massive textile factories which has resulted in the importation of all cotton products despite the country’s vast cotton supply.  He also lamented the plunge in local vehicle assembly plants to an extent that the country imports most vehicles and has become a massive dumping ground for dying second-hand vehicles.
Emefiele called for a return to massive homemade production under President Buhari’s administration as a panacea to the country’s import dependency
“We must get our people working again. We must create the economic environment for massive domestic production and significant non-oil exports,” he added.
Businessamlive Website Stats