Can you tell us the role of Tshabron Group in the economic development of Imo State? 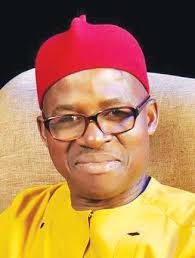 Productivity is a function of quantum of energy that each individual is putting in and when you put in, you will also produce. Like somebody who plants small yam at the end of the farming season, the yam grows big, that’s production. Whatever thing you are doing even if it is selling gari, you buy one cup today and sell it tomorrow, and you proceed to buy two and sell them that is production. And in that way you are enhancing the productivity of the state or the country.

It is not because we are tough or very productive or very exceptional, it is God’s grace that gives us the platform and we apply it knowing that God who gives us the particular enablement is the only person that is appreciating us and not the government.

Now, are you saying the government is not encouraging investors in the state?

The government itself has failed; I must say it, in providing the basic amenities, basic amenities like electricity, roads, water, peace and security, all these things are lacking. But in spite  of all this, we are still  moving ahead, we still try to be innovative and wriggle out of all these menacing challenges that affect the productivity and safe living.

Are you now veering into challenges?

Yes, I am; for example, electricity. As we speak, in my main office, we have been running that place on generator because we were confronted with a mad type of billing by EEDC [Enugu Electricity Distribution Company]. Even for a transformer that I got two of my neighbours to agree to buy, we  bought a brand new transformer, set it up,  paid for it, installed it only to hand it over to EEDC. And from that very moment, in spite of the fact that they did not consider giving us any compensation or concession, the type of bill they send to me always, is killing.

In the month of April at the heat of the Corona Virus pandemic when our big partners said that all businesses should close and we closed down; in that particular one month of April, I got a bill of N179,000 for an office that was completely closedown, an office that did not open even for one second in that month. This will tell you the type of challenges we are facing from the hands of EEDC.

Ordinarily , power  is part of what the government should provide for the people and for the purposes of running  small businesses and, of course, small and medium enterprises (SMEs), to help engineer and run the economy,  to crystallize the performance of the economy. But instead, what comes out as our little or meagre profit, we use it to pay very exorbitant electricity bill.

And ever since then I said please, I want to get meter and EEDC has refused to give me electric meter; ever since then till now. I run that office on generating plant with about 150 staff I have.

Then on security, some weeks ago in the middle of the night, a band of armed robbers swopped into our office and broke every door, all the safes we have and catered away our property. The security men we have there, very active people who were not armed, were over powered by the armed robbers. But those armed robbers came with various gadgets that were able to open all security doors even the safes we have.

I have on many occasions called the commissioner of works, the Imo State government; I have invited them to my office, every day I snap pictures of my environment and send to the commissioner. What he keeps on telling me is that they will come, they will come; up till now nothing has happened. I’m talking about the government support for the business we are doing, nothing, no help is coming from the government.   We have done our own beat by helping government to take away young people that would have been bad people on the road. We gave them employment, we pay them handsomely, every month; but for government to do their own bit, they have not done that. So, there is need for government to do their bit.

Tshabun Group has been an enabler in the economy of Nigeria and Imo State, but we have not gotten our fair share from the government in terms of support and assistance.

You talk about Tshabron as a conglomerate; could you please tell us more about this group?

Tshabron is made up of different companies, we have Joke Box Communications Limited, we have Optimum Voice; we have Chally Enterprises, Tshabron Farms and other ancillary businesses that are teamed up. You know, a performing or thriving business will always have a joining impact, people who play different roles, even the fishery department and all that.

Tshabron had a fish farm where millions of money was sunk in, could you  tell us the progress recorded  so far or otherwise?

Talking about this Fish Farm, it is an area of the business that we mobilized and fashioned out clearly and put in millions of money because it is a massive fish farm with many fish ponds. A very clear cut out business that would cater for greater part of Imo people in so many ways, in terms of meat production, production of protein, etc. This is because the number of fish ponds we have there, if fully stocked would be able to provide the fish needs of Imo people.

Definitely, tonnes of fish that we could produce there monthly would be able to take care of the South East and South South because we invested millions of money there. We had massive production but at the end of the day, the harvesting of those fish became a problem.

What were the challenges or problems?

The reason is because the place our fish farm is, the site is in the industrial layout of Imo State and it is not a motorable area, as we are talking. You cannot drive in or out of that place because of bad road networks, because of dilapidated infrastructure, the industrial layout is broken down.  In fact our generators that were used to run that place for 24 hours were vandalized by a gang of armed robbers one night.

It exposed us to danger and the total effect is that our fishes started dying; we lost huge sums of money. At the end of the day, because there was nothing again there, we had to retrench the staff, we had to let go about 58 staff.

So, what am I talking about is, if the government of Imo State can mobilize resources and develop the roads that lead into the industrial layout, Irete, I bet you, all those miscreants that are moving about will enter into that place and they will find one thing or the other doing. For example my fish farm alone could be able to take 150 graduates.

So, I am using this opportunity to call on the good government of His Excellency, Senator Hope Uzodimma to please, fix the roads in the industrial layout and others    in the state. I can tell you by the time he fixes the roads in the industrial layout and all the companies that are supposed to be working there open up their factories, then unemployment rate in Imo State will drop drastically. And life expectancy in Imo State will increase and people will be happier.

But if the place is left the way it is after four years, it means the government is not doing well. So I want to call on the governor and the state executive council to take a look at that particular place and do something immediately.

And that is something they should commission a good construction company to come in there to develop all the roads because, if the roads are there, the security of that particular place will be enhanced, electricity provided, Imo State will be something else.

The state will attract foreign investments, foreign interests, and Imo State will be enhanced because, if foreigners come and go into that place and see that the place is well set out, of course they will invest.

We already have the hospitality industry, hotels are all here. The government should be able to redirect all its priorities towards infrastructural development and see to the root of things that will make people happy especially businesses.

Talking about business, as an investor whose head office is domiciled in Owerri, do you see some profitable areas of investment, investors and potential investors could take advantage of?

There is huge market here. Imo State is also endowed with human resources, there is nothing an investor brings into the state that wouldn’t be able to see the market and productivity done and sell, there is market here.

Take for example, all these industries that cluster around Lagos is because the government of Lagos state is providing them an enabling environment. Now, take for example tiles, the majority of people that use tiles and sell tiles in Lagos are from Imo State. So what stops industries coming into the state? The government has not developed the infrastructure.

In Okigwe area, we have clay, we have lime stone at Nsu in Mbano, we had clay industry built by the late Sam Mbakwe administration and those things had been left to rut. In fabrication, the raw materials cannot be too far-fetched from this place. We have the manpower to drive all these things, and we have also people who are committed, we have people who are ready to work but because the government has not really enabled them, that is why most of them, their brains are getting moribund. So, that is what I want to say.