By Dikachi Franklin, in Owerri
A bureau for donor agencies has been established in Imo State and it is called Imo State Bureau for Donor Agencies and has the full responsibility of  oversight of all programmes that are linked to opportunities  from the World Bank interventions, international grants, national donor programmes as well as any other interventions in Imo State. 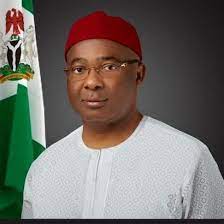 Consequently, Hope Uzodinma,  the state governor, has stated that critical scrutiny of the activities of the bureau in charge of World Bank and other international and national interventions would help a lot to  guarantee the success of the implementation of the interventions.

Uzodinma, who spoke to the Nigeria Covid-19 Action Recovery and Economic Stimulus National Team and their state steering committee counterpart that visited the state, told the members that Imo State was poised to properly coordinate all the World Bank projects and other international and donor agencies, hence the enactment of a law establishing the bureau.
He told the national project team that without prejudices to the operations of the World Bank Implementation Units, every intervention or programme would go through the critical scrutiny of the bureau, to ascertain the manpower needs, both technical and non-technical, so as to deploy the needs to ensure a win-win situation where the World Bank, federal government as well as Imo state would all be happy.

Uzodinma had  earlier listened to the presentations of the team leader on why they were in Imo State, had equally expressed satisfaction that the national team had confirmed that Imo State  was fully ready for the implementation of the NG-CARES, promising them that whatever had not been done properly for the project to commence would be done without delay.
He commended the role of the federal government and the World Bank over the project, and acknowledged the complementary role being played by the secretariat of the Nigerian Governors’ Forum in ensuring that the project is implemented as designed.
Briefing the governor earlier on why they came to the state, the team leader,  Raphael Obi, said they came to assess the readiness of Imo State for the implementation of the NG-CARES.
According to Obi, they were sent by the World Bank to visit the 36 states and the FCT for the purpose of determining their readiness to access the grants on the NG-CARES.
The team leader acknowledged that by their observations Imo State was close to 90 percent ready for the programme to commence.
He noted that the first requirement by the World Bank is the “inauguration of the Steering Committee”, which Imo State had already achieved.
Reassuring the governor of their sincerity of purpose, the team promised not to be an impediment to the success of NG-CARES in Imo State.
Doris Azuogu Anite, the commissioner  for finance and coordinating  economy, as well as  the state chairman on NG-CARES, led the three man national team that visited  the governor.
Businessamlive Website Stats