Global: Sentiment across the global space was largely mixed this week, as select major markets closed lower w/w, while food and metals commodity prices continued to rally. We also observed sell-side action across energy markets, as Brent Crude and Natural Gas prices fell -3.86% and -7.78% w/w respectively. Moving to the Equity space, we saw the German Dax and French CAC shed 1.73% and 2.66% respectively. On the DAX, plane manufacturer AIRBUS fell sharply this week, losing -8.77% w/w, with Damlier AG easing -7.67%. Meanwhile, in France, players in the banking space were amongst the worst performers this week, with BNP Paribas falling -10.33% w/w, and luxury goods maker LVMH falling 3.73% w/w. Moving to Asia, sentiment in the region was largely sell-side driven, with the Japanese Nikkei ending the week as the worst performer in the region shedding 2.46% w/w. While in China, the Shanghai Composite eased 0.91% w/w, as losses in the industrial goods and pharmaceutical sectors weighed on its performance. Notably, drug maker Ningbo Menovo fell 15.25% w/w. Finally, in the U.S., tech stocks fell sharply this week, as the NASDAQ was the worst performer in the region, down 3.47% at time of writing. The index’s performance was dragged by losses in chipmakers NVIDIA and MCHP, as they fell 12.53% and 9.26% w/w, amongst the worst performers on the index. Meanwhile, the Dow Jones and S&P 500 were down 0.36% and 1.18% at time of writing.

Domestic Economy: President Buhari announced this week that the budget deficit for 2022 Appropriation Act would be increased from N6.39 trillion to N7.35 trillion as a result of global and economic developments. The President stated that the N965.42 billion difference would be financed from domestic sources. While the debt-to-GDP ratio remains sustainable, we can anticipate an increase in debt servicing, which is already at high levels. As of November 2021, debt servicing stood at 76% of revenue, with the IMF projecting it to rise to 92% in 2022. While domestic debt protects the country from foreign exchange risks, domestic loans to the government could increase money supply and worsen already high inflation levels. Finally, the sustained dependence on borrowing for recurrent items could heighten debt sustainability risks in future.

Equities: Amidst a week of mixed trading, the Nigerian market closed lower this week losing 0.45%, to close at 46,631 points. Interest in the oil and gas space, saw the sector end this week as the top performer rising 3.14%; oil marketers were the beneficiaries of the buy-side action this time following weeks of sell-side action. ARDOVA rose 9.87% w/w, with OANDO and CONOIL rising 2.13% and 16.85% w/w respectively. Meanwhile, the Banking sector saw some buy-side action this week following last week’s selloffs; ZENITHBANK rose 2.68% w/w, while FCMB and UBA rose 4.24% and 1.95% respectively. On the other hand, the Consumer Goods space continues to struggle, falling 0.35% w/w; the sector is the worst performer YTD down 6.30%. Likewise, in the industrial Goods space sell-side action in WAPCO (-2.65% w/w) dragged the sectors performance as it lost 0.42% w/w. Finally, in the Telecoms sector MTNN saw its shares fall 3.74% this week, as investors react to the latest directive from the Federal Government to phone operators, where they have been asked to restrict access to non-NIN registered users.

Fixed Income: This week, the fixed income market remained largely bearish, with pockets of buy-side activity seen on select days. In the bond market, we saw selloffs across the benchmark curve following the release of the Q2’22 FGN bond issuance calendar and the expectation of a rate hike in the next bond auction, which resulted in a 26bps w/w rise in average yields. Meanwhile, trading in the NTB market began on a tepid note however, pockets of sell-side activity in select trading sessions increased average yield by 6bps w/w. Finally, with little activity in the OMO market, average yields closed flat w/w. 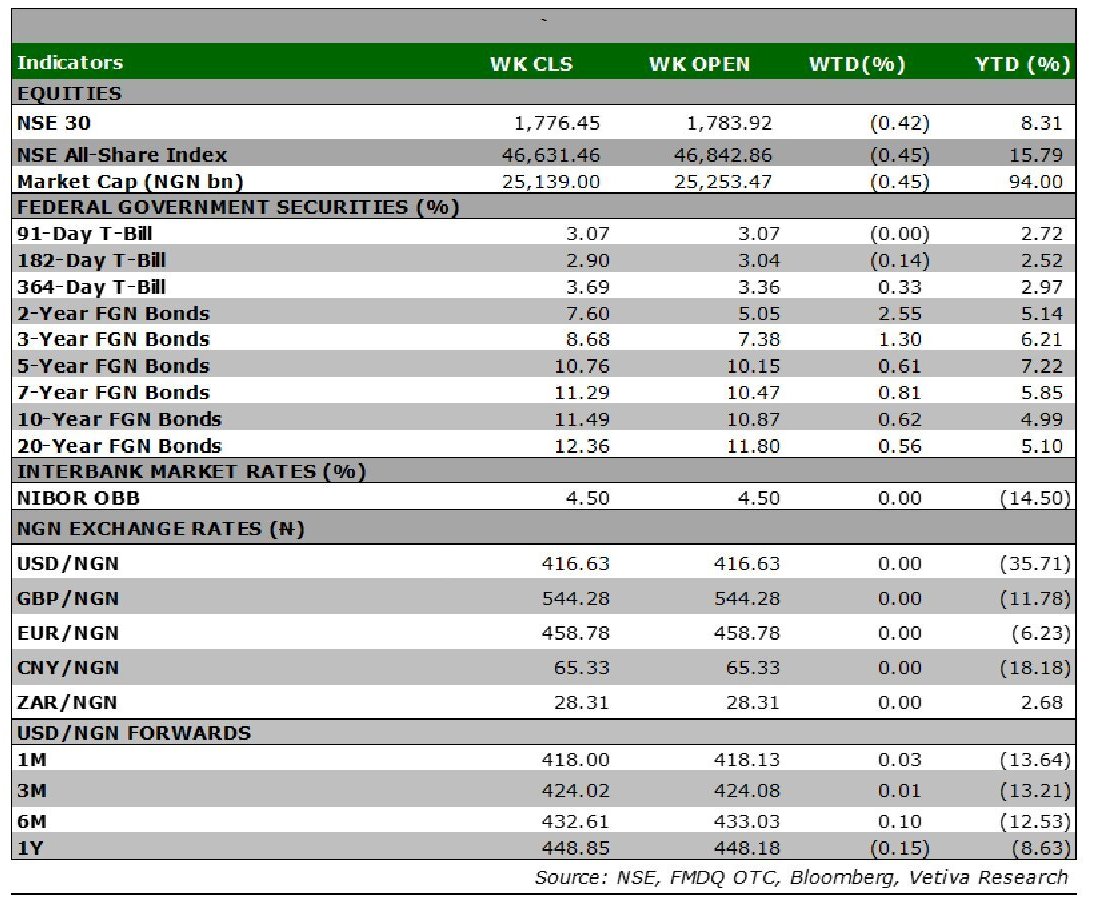 Equity market: Just as expected, we saw investors take advantage of the price dip, hence the green close seen across broad. However, market still trended mostly bearish with a 11.80% reduction in weekly trade volumes. We expect to see a slight improvement in these numbers amid further mixed sessions spurred by bargain hunting activities.

Fixed Income: Next week, the NTB market should trade on a muted note ahead of the NTB auction slated for Wednesday. Meanwhile, we expect the bonds market to trade on a bearish note, as market participants react to the Federal Government’s plan to borrow an additional ₦965 billion. .

Yesterday, the Monetary Policy Committee (MPC) voted to keep benchmark rates constant. The decision, however, was not unanimous, as six members voted to hold, three members preferred a 25 basis points (bps) hike, while one voted to raise interest rate by 50bps.

In addition to its increasing capacity utilization for existing brands, we believe that the company’s newly launched Trophy Stout (in 2020) has gained some traction in the stout space, adding to its sales volume. Consequently, driven by firmer pricing implemented during the FY’21 period across its malt and Lager brands, IB’s Revenue expanded 33% y/y to ₦182.3 billion.

Whilst the rising inflationary impact on raw material prices has been a significant cost driver, pushing IB’s cost of sales up 28% y/y to ₦136.0 billion in FY’21, the effect of the stronger pricing in the period was more impactful on the company’s gross margin, which came in 3ppts higher y/y at 25%. Furthermore, although its operating expense has also climbed 32%y/y to 53.6 billion, prompted by a 40% spike in marketing and promotion expenses, its EBIT margin improved by 7ppts y/y from -17% to -10%.

Regarding finance costs, whilst its debt balance has remained at a significant level (₦175.4 billion in FY’21), the company’s overall finance expense has declined considerably over the past two years. We attribute this improvement to a decline in FX losses (from ₦14.5 billion in FY’20 to ₦10.0 billion in FY’21) due to a currency hedge. Accordingly, net finance expenses for the year dropped 7.5x to ₦1.8 billion between FY’19 and FY’21, albeit 7% higher from FY’20.

Although the company’s asset efficiency has increased by 52% since its capacity expansion in 2019, it still has a low asset turnover of 0.74x compared to the industry average of 1.7x, as at FY’21. As such, we believe that prospects for increased capacity utilization and volume roll-out look positive and we expect asset turnover to grow to 0.83x in the FY’22 period. The outcome of this could also be instrumental in covering its large, fixed costs component and improving profitability. However, the company’s low pricing strategy relative to competitors could remain a headwind, especially considering possible continued challenges in global supply of raw input.

Overall, the improvement in the company’s profitability bodes well for its outlook. As such, in line with our capacity outlook and the new pricing level, we estimate a FY’22 Revenue of ₦199 billion, +9% y/y and a reduced LAT of ₦10.0 billion. Thus, we estimate a one-year target price of ₦4.31 per share and rate the stock a SELL.