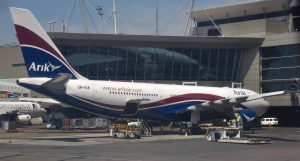 Felix Akinbinu, regional general manager, Federal Airports Authority of Nigeria (FAAN), had complained in Port Harcourt that the curfew was the main issue delaying the resumption of international flights at the air terminal.

“The curfew was preventing international airlines from operating at the airport. We have been given approval to resume international flights by the NCAA (Nigeria Civil Aviation Authority), following the lifting of Covid-19 restrictions, but the foreign operators have refused to commence flights because of the curfew imposed by the Rivers State government. That is the only thing holding us down and nothing more,” Akinbinu, who is in charge of FAAN in South-South and South-East, had said.
Two to three international operators use the terminal, namely Air France KLM, Lufthansa and, recently, Turkish Airlines.

Governor Wike, in a state broadcast, said the relaxation of the curfew is sequel to the measurable improvements in the security situation in the state, as well as in other neighbouring states.
He acknowledged the negative impact the curfew had brought on business and the social-economic wellbeing of the state and its residents.
“In imposing the curfew, the government’s primary concern and interest was and still remains the security of the state; and no sacrifice or price can be said to be too much to endure for the preservation of lives and property. As we have severally stated, the curfew is not going to last a day beyond necessary. Consequently, sequel to the measurable improvements in the security situation in the state, as well as in our neighbouring states, we have decided to lift the existing curfew on the entire state,” he said.
Rivers State Government had on 29 April this year imposed state-wide night curfew on all its 23 local government councils, to check the attacks on security agencies in the state. The curfew prohibited all human and vehicular movements in the state from 10:00 p.m. to 6:00 a.m. until further notice.
FAAN explained that most international flights usually took off in the night from various destinations, and arrived at the airline’s hub in the morning where the passengers connecting flights to other destinations could do so.
It said there has been appreciable growth in passenger traffic since domestic flights resumed, but FAAN said the airport could generate more revenue if international flights resumed.
About seven airlines operate in the Port Harcourt Airport now. Ibom Air, owned and operated by the Akwa Ibom State government, might make the eighth operator. Key operators at the terminal include Air Peace and Arik, which operate two flights daily, to Lagos and Abuja from Port Harcourt.
With United Nigeria Airlines signing an agreement with the Bayelsa State government to link its airport, and Ibom Airlines – Dana Airlines route merger, more flight frequencies might be coming into the terminal.
“There has been some growth in passenger traffic since the Covid-19 restrictions on domestic operations were lifted, and we expect more. I can’t give the exact figures of passenger traffic, but I can say for a fact that there has been an increase, especially as more airlines are coming in,” FAAN’s Akinbinu said.
Businessamlive Website Stats