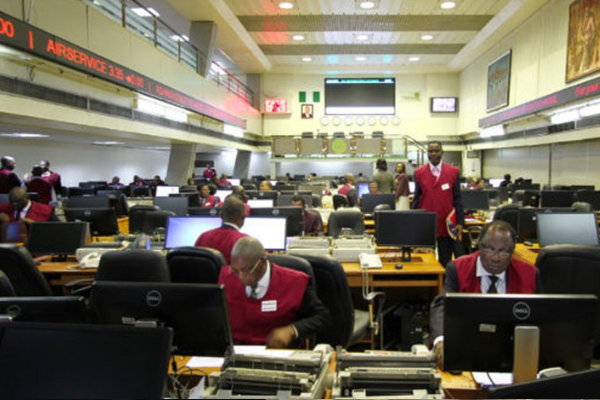 Investors’ sell-offs in Zenith Bank, Guaranty, and Diamond Bank impacted negatively on the banking index and the overall All Share Index of the Nigerian Stock Exchange on Monday.
Diamond Bank recorded the largest decline of 9.4 percent on news of its acquisition by Access Bank, but the news has since been denied by both banks who filed separate statements to the NSE clarifying that the stories were rumours.
The decline continued with Zenith and Guaranty Trust Bank, both of which shed 1.6 percent and 1.8 percent respectively on further sell-offs and thus  lowering the benchmark index by 0.2 percent to 32,143.41 points. Market capitalisation also shed N27.5 billion to settle at 11.7 trillion.
The year-to-date losses thus worsened to -15.9 percent. However, activity level was mixed as volume traded increased by 17 percent to 142 million while value traded dropped by 2.0 percent to N1.6 billion.
Diamond Bank saw 32.3 million units of its stocks traded in the course of the day, which helped it to top volume booster, followed by Guaranty Trust Bank that exchanged 20 million units while 16.1 million units of UBA’s stocks exchanged hands.
Top traded stocks by value were GTB, Zenith and UBA, with traded stocks worth N738.1m, N285.2m and N128.3m respectively.
Performance across sectors remained bearish as only 2 of the 5 major indices closed in the green. The oil and gas and consumer goods indices appreciated 0.7 percent and 0.2 percent respectively, following buying interests in Oando (+6.5%), Flourmills (+7.1%) and Honeywell Flour (+2.9%).
On the flip side, the insurance index declined the most, down 1.3 percent on the back of price depreciation in NEM (-8.2%).
Similarly, the banking index trailed, following sell-offs in Diamond Bank (-9.4%), Zenith Bank (-1.6%) and GTB (-1.8%) while the industrial goods index closed flattish as gains in Vitafoam (+2.2%) failed to buoy the index.
Investor sentiment as measured by market breadth (advance/decline ratio) slightly weakened to 1.2x from 1.3x recorded last Friday as 14 stocks advanced against 12 that declined.
The top gainers were Regal Insurance (+10.0%), UnionDAC (+8.0%) and Flours (+7.1%) while ABBEYBDS (-9.4%), Diamond Bank (-9.4%) and NEM Insurance (-9.4%) were the worst performing stocks.
The day’s bearish performance was against analysts expectation, however, the negative trend is expected to persist till midweek while bearish market outlook over the near term is maintained.

MTN Nigeria Limited changes to Plc ahead of NSE listing