Iron ore prices jumped into bullish territory to record a fourth consecutive weekly gain,buoyed by growing hopes of a recovery in steel demand in China.

Iron ore’s most-traded May contract on China’s Dalian Commodity Exchange traded 1.9 per cent higher at 676.50 yuan a tonne, after earlier touching 696.50 yuan, its strongest since October 28. Analysts however observed that optimism around the key steelmaking ingredient, continued to be tempered by China’s rising stockpiles of imported iron ore which rose to 156 million tonnes last week, the highest level since July 2018. 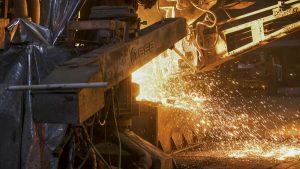 Huatai Futures, a leading investment consultancy in China, observed that since targets for crude steel output are set to be met anytime soon, some mills have commenced production, reflecting rising profitability.

“For the steel market, in particular, the stabilising construction activity in China also helped lift the overall mood. This supports steel demand, though the backdrop remains challenging for iron ore until February 2022,” they noted.

Though some analysts projected a dip in China’s steel demand from 2022, they noted that consumption from infrastructure construction,automobile and other sectors will continue to offer support for high demand and quotations.