Jumia, Africa’s first unicorn to be listed on the New York Stock Exchange, has recorded a drop in its gross merchandise volume (GMV) in the first quarter ended March 31, 2021, the company’s financials for the period just released shows. From $229 million for the same period last year, GMV went down to $200 million in Q1 2021, Jumia disclosed. 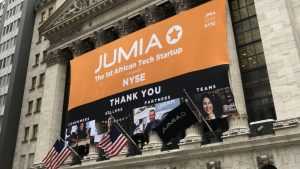 An examination of the report seen by Business A.M., shows gross profit after fulfilment expenses skyrocketed by 149.5 per cent to $7.5 million. Last year this stood at just $3 million for the first three months. The first quarter numbers represent a drop in its performance when compared to the last quarter of 2020 where it reported over $10 million in gross profit after fulfilment expenses.

However, the average order value declined by 16 per cent year on year from $35.8 million to $30 million in Q1 2021. In its argument, the company attributed the significant drop in the value of goods and services on its platform to the expanding level of inflation as well as currency devaluation in Nigeria, Egypt and Kenya, which stood at 16 per cent, 9 per cent and 19 per cent respectively. The trend of declining GMV has been the case for over five quarters, according to the financials.

However, Jumia in September 2019 shifted focus to FMCGs with less attention on high-end items like laptops, phones, amongst other things.

Elsewhere in the report, the eCommerce giant revealed that its customer base grew to 6.9 million, representing 500 thousand customers or 6.9 per cent higher than 6.4 million in Q1 2020. It also shows an addition of 100 thousand more customers when compared to the last quarter of 2020 when it recorded 6.8 million customers. The company assumes that everyone who places orders, irrespective of returns and cancellations, is an active customer.

Similarly, orders increased 3 per cent year-on-year for the first time in three quarters to 6.6 million, but still fell short of previous quarters after declining by 18 year cent on a quarter on quarter comparison.