Global: It was another mixed week of trading across global equity markets, as markets which sustained significant losses in previous sessions rose w/w, while those who recorded previous gains closed lower w/w. Amidst rising concerns about a global recession, investors sought to snap up counters that had fallen in recent sessions; in Asia the Nikkei-225 rose 2.24% w/w, whereas the Shanghai Composite and Hang Seng index sank 0.61% and 0.93% respectively. Moving to Europe, the accountment of the resignation of the British Prime Minister Boris Johnson saw exchanges in the region trade mixed, with the London based FTSE-100 sinking 0.33% w/w, whereas in Germany, Volkswagen and its partners revealed a €20 billion investment into a battery cell business. The German DAX rose 1.46%, while the French CAC climbed 1.67%. Finally, in the United States growth stocks saw strong buy-side activity this week, as the NASDAQ was up 4.36% w/w; Earlier in the day, the Labor Statistics Bureau had released its latest report saying that total nonfarm payroll employment in the United States increased by 372,000 in June, above market estimates. The Dow Jones and SP 500 were also trading in the green w/w, up 1.22% and 2.27% respectively. 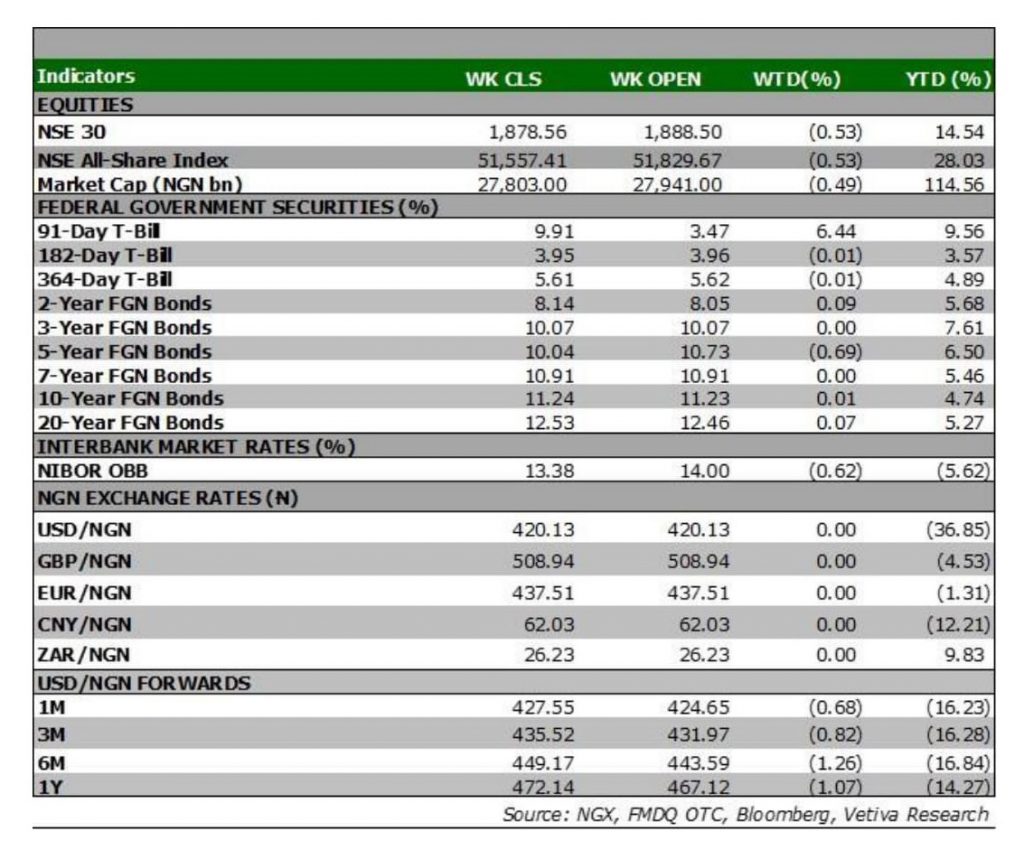 Domestic Economy: According to CBN data, Nigeria’s external reserves fell 3.4% in H1 ’22 to $39.16 billion. While the first half of the year saw inflows from Eurobond issuances and domestic borrowings, swelling demand continues to outstrip supply. FX demand has remained elevated due to rising import bills as food and energy prices surge, as well as the increased FX demand for election-related activities. Meanwhile, despite rising oil prices, supply remains constrained due to persistent oil theft and damage to oil infrastructure, thereby limiting output and Nigeria’s FX-generating capacity. If FX demand continues to outpace supply, the naira could fall even further, particularly in the parallel market.

Equity market: We are likely to see market sentiments remain bearish with pockets of cherry-picking activities across board, as investors await Q2 earnings report.

Fixed Income: Next week, we expect bearish sentiment to persist in the bonds market, while the NTB and OMO segments are likely to trade quietly as attention shifts to the upcoming PMA.

In June, the All-Share Index was dominated by bearish activity. The ASI lost 2.21% m/m amid sell-offs following the hike in MPR to 13%. Our conviction stocks were not immune to this decline, as they lost 0.73% m/m. This decline mirrored the broad market, as Banking names led the contraction, followed by Consumer and Industrial Goods.

Oil & Gas was the best performer in the portfolio, as crude prices held steady above $100/bbl once again. However, the returns in the sector were minimal, with SEPLAT rising 0.8% m/m while TOTAL remained flat.

Our Industrials and Consumer Goods stocks declined slightly, with investor sentiment weakening over the course of the month. DANGCEM lost 1% m/m, while WAPCO fell by 2% and DANGSUGAR dropped 4% m/m. This dragged the conviction stocks’ performance by -0.5%.

Once again, the Banking sector was the worst performer. ACCESSCORP and ZENITHBANK lost 8% and 7% m/m respectively, while FIDELITYBK recovered some of its losses from the previous month, rising by 4% m/m. The poor performance was mainly driven by investors fleeing the market in search of higher returns in the Fixed Income space.

Following the revised outlook for our coverage companies in H2, we are now more optimistic about the performance of JBERGER and UNILEVER, and as such, we are replacing DANGSUGAR and ZENITHBANK with these two stocks. The new stocks will retain the weightings of the stocks they replace.

As at June 30, construction stock, JBERGER has gained 18.6% YTD and currently sits at ₦26.50. The firm reported a 32% growth in profits, thanks to higher turnover in the first quarter.