Rice farmers in Bagwai local government area in Kano State, have called on the state government to revamp the Watari irrigation dam to enable them cultivate their farmlands during the dry season. 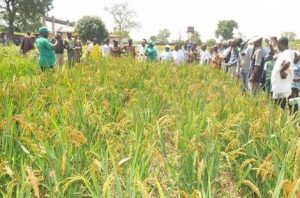 Danladi Yahaya, chairman, Rice Farmers Association in Bagwai, enjoined relevant authorities to revamp the reservoir and canals as well as construct an access road in the area to ease movement of their farm produce to the market.

Salisu Dandawaki, a rice farmer said the call was imperative to ensure that the reservoir and canals under the irrigation scheme were made operational to supply water to the farmlands.

Dandawaki said that farmers in the area had relied on rain water to cultivate their farmlands, limiting their activities to the rainy season.

He added that water should be released from the Bagwai dam to feed the reservoir and supply the farmlands under Sector-1 of the Watari Irrigation scheme.

Nasiru Sabiu, another farmer, lamented that the lack of water supply from the reservoir was discouraging as small holder farmers were forced to abandon their farms during the dry season.

Sabiu said the absence of tube wells was making it difficult for them to cultivate their farmlands during the dry season.

In response to the complaints levelled by the farmers, Bashir Rabiu-Kwa, the project manager, Watari Irrigation scheme, said the release of water to the plantation was suspended to pave way for maintenance work.

He said that the project was designed to open up 1,562 hectares of irrigable lands, adding that 962 hectares had been developed and cultivated by farmers.

The manager assured that work on the development of the remaining 600 hectares of land was currently on-going under sector-6 and sector-7 of the project.