The Katsina State House of Assembly has passed an executive bill for the establishment of a Contributory Pension Scheme in the state during its plenary presided over by Tasi’u Maigari,  the speaker of the house. 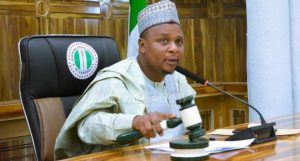 The passage of the bill followed the presentation of the report of an ad-hoc committee on contributory defined benefit pension scheme and chaired by deputy speaker, Shehu Dalhatu-Tafoki.

Explaining that the bill was an embodiment of a proposal from the executive for the introduction of a new pension policy for the state, Dalhatu-Tafoki said the presentation of the bill itself was in line with the reform of the pension system initiated by the Federal Government in 2004.
“The reform culminated in the enactment of the Pension Reform Act, 2014. The new act has made it mandatory for states, local governments and private sectors to adopt and implement the contributory scheme for their employees,’’ he said.
While he stressed that the significant difference between the new pension scheme and the current system is the size of contribution which an employee was required to make under the new scheme, he added that the new model, a replica of Jigawa consist of  adequate transitional provision that will guarantee continuation of payment of benefits to civil servants who are not covered by the new scheme.
In this regard, he concluded that the current pay-as-you-go system is filled with numerous problems that signal the unsustainability of the system.
“The economic depression in the country suggests that it can no longer support the smooth implementation of the existing system. The paradigm shift of the policies that govern the pension landscape is the ultimate panacea to the lingering problems that beset the sector,’’ he said.
Consenting that the adoption of the CPS will promote the objectives of the law, the lawmakers unanimously adopted the report and passed the bill for the introduction of the new pension scheme in the state.
Businessamlive Website Stats