The largest oncology and diagnostic centre in West Africa is to be built in Kwara State, Nigeria, from an initial grant of N2.5 billion awarded recently by the Abdul Samad Rabiu (ASR) Africa Initiative under its Tertiary Health System Infrastructure programme. 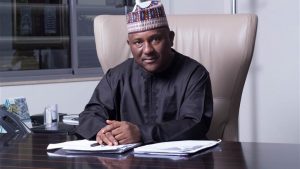 The ASR Africa Initiative, a corporate social responsibility brainchild of  Abdul Samad Rabiu, founder of BUA Group, and the Kwara State government, in a joint announcement, said the construction of the centre will be funded from ASR Africa’s annual $100 million Africa Fund for Social Development and Renewal and that is expected to be ready in 2022.
The grant was presented at the proposed site of the centre where Kabiru Rabiu, group executive director, BUA Group, representing chairman Abdul Samad Rabiu, commended the governor for his commitment to healthcare development, social infrastructure, maternal and child health, and education, which he noted are also the pillars of ASR Africa’s vision.
The ASR Africa Oncology and Diagnosis Centre, he said, is a standalone facility dedicated to oncology diagnosis, research and treatment, which would go a long way in bridging the gap in cancer research, diagnosis and treatment in West Africa.
“We appreciate the seriousness with which Governor Abdulrahman and his team have put to kickstart the project in line with our mutual accountability framework. We are moving to site as early as August and the chairman, Abdul Samad Rabiu, has mandated that the oncology center must be completed before the end of 2022,” he added.
Governor AbdulRahman AbdulRazaq thanked the BUA Group chairman and initiator of ASR Africa for the grant, assuring that the construction will commence on-site before the end of August. He asserted that the oncology and diagnosis centre is a legacy project that will last for years and  would be a priority project which will anchor the health care system, adding that Kwara State is open for business and would commence private-public partnerships in the healthcare sector to attain sustainability.
He also spoke on the impact of COVID-19 pandemic, noting that the state recorded a low mortality rate during the peak of the pandemic because the government had rebuilt the oxygen facility to accommodate the high demand of oxygen, as well as strengthened systems to manage the pandemic.

Adidas looks to Russia 2018 to boost sales after revenue from country plummeted on sanctions, weak currency