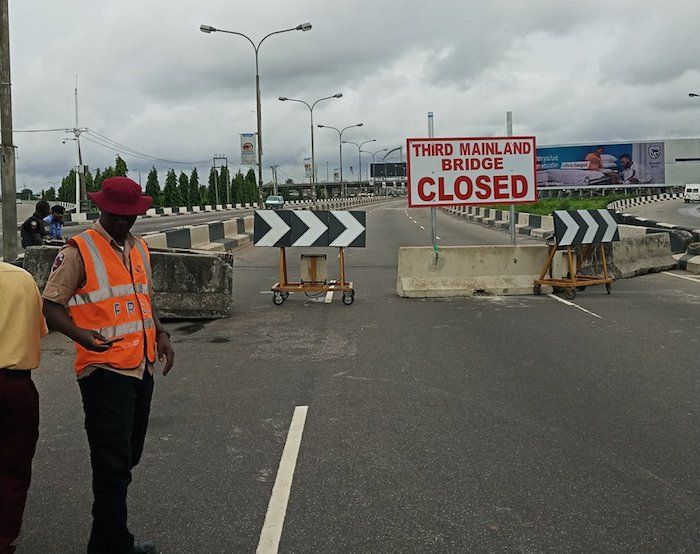 Nigeria’s longest bridge, and the second longest in Africa, one of the busiest on the continent, that connects the mainland and the two islands of Victoria Lagos and Lagos Islands, the Third Mainland Bridge, is now partially shut down, for what the federal government said is long overdue repair works to be carried out. The closure will last for six months taking people who use the bridge into the New Year, 2021 during which time they are expected to make their way through alternative routes.

The repair works are being midwifed by the Federal Ministry of Works and Housing under Babatunde Raji Fashola, former governor of Lagos State, which, responding to the clamours of the many commuters who reported some noticeable cracks and vibrations, indicated the necessity for urgent attention on the high vehicle traffic bridge.

The 11.8 kilometres bridge, whose closure began in the darkly hours of Friday, July 24, 2020, on the directive of the government, has raised concerns on salient issues concerning commuters experiences plying other routes which have been provided as alternative by the Lagos government, in its effort to ensure seamless movement and safety of Lagosians commuting to and fro the islands for their businesses in the face of the closure.

What is likely to become news under the circumstance, is impact the closure is likely to have on manpower/employee and business’ productivity in the long six months the state is going to experience from losing the use of the Third Mainland Bridge for vehicular and human commute; the heavy impact it could have on businesses and firms located on the island, especially arising in form of loss of business and customers who trust their products and services but who will become frustrated with the gridlocks that will arise on the alternative routes. This is besides the hike in transport fares that will arise from traffic jams that will drastically reduce journey turnover of transporters, hence the resort to increasing fares.

There is the broader impact on the economy of Lagos, and invariably Nigeria, considering the fact that Lagos is the major contributor to Nigeria’s VAT pool, observed Uche Uwaleke, a professor of finance and capital markets at Nassarawa State University, in response to Business A.M.’s questions seeking his views on the economic implication of the closure of the Third Mainland Bridge.

The bridge is closed despite the high daily vehicular traffic

The decision to partially close the bridge for six months may have been seen as the simplest option by many. This position is hinged on plans by the government to ensure the bridge is safe and hitch-free when commuters are on it.

However, though, the scheduled rehabilitation works on the bridge, currently ongoing, is to make sure that the main transportation facility linking the island to the mainland, the anticipated impact on movement by the bridge’s closure on all and varied has involved careful observation considering the statistic that over 180 thousand vehicles ply the bridge daily, thus, making the bridge the busiest road within the country.

Uche Uwaleke, a professor of finance and capital markets at Nasarawa State University and a fellow of the Institute of Chartered Accountants of Nigeria (ICAN), told Business A.M. in response to questions that it was better late than never.

“The plan may be a welcome development for a megacity with decaying infrastructure. Not maintaining a critical infrastructure as the Third Mainland Bridge also has its own consequences, perhaps deadlier than the inconvenience the temporary closure will cause,” Uwaleke said.

Babatunde Fashola, minister of works and housing, in a briefing before the shutdown of the bridge proposed that the remedial works, which shall be administered on the bridge, would be phased, with each stage having a length of 3.5 kilometres each till the 11.8 kilometres get completed for the six-month duration.

“The construction of the bridge spanned three decades and we cannot afford to rebuild it if we allow it to collapse. Infrastructure must be maintained. After the work is completed, we’ll have a far better driving experience on the bridge,” Fashola said, adding that the sum of N277 billion was going to be needed to rehabilitate all the 37 bridges nationwide.

The shutdown of the busiest bridge in Nigeria will bring in its wake consequences for commuters, businesses and the economies of Lagos and the country as a whole. Hundreds of thousands of commuters who use the bridge each way have been bracing themselves up for the consequences that will hit them in the often chaotic roads of Lagos, now that they have to seek out alternative routes to get either to their places of work or to conduct their trade or business.

“I consider the pains and the economic costs associated with the closure as the price to pay for the inability of governments over the years to expand the stock of infrastructure in the country. Reminds one of the inconvenience people went through when the government decided to rehabilitate the only runway at the Nnamdi Azikiwe Airport in a facility that should have more than one.

“As a matter of fact, there is no reason why Lagos State should not have many highways linking the Mainland and the Island in addition to light rails and efficient water transportation in the light of its fast growing population. It is the absence of these alternatives that is compounding the costs of closing the Third Mainland Bridge to traffic. But, as I noted earlier, it is better late than never,” he stated.

Notwithstanding, commuters are bracing themselves up for the surge in transport fares, that will leave most of them frustrated and out of pocket, especially lower cadre workers who must make their way each way every day. For most, transport already takes a good chunk of their daily cost. Now, this is going to make it worse. And that it will go on for six months into the new year makes it even more challenging, especially for those who are in the lower cadre at work and who must hold down a job to get on by in life.

Most experts spoken to for this story told Business A.M. that we should expect there to be consequences on manpower and productivity. Manpower, the most valuable asset in any organisation, helping to drive growth, especially in the private sector is about to suffer heavily in Lagos State. Lagos Island, is arguably the nation’s financial capital, and over the years, the island of the big banks and other big financial players, have seen their workers come from far and near to carry out their daily tasks, some of which involved meeting tight targets.

For workers or staffs who live very far from their offices, and who used to get on the Third Mainland Bridge to get to their places of work, the clogging up of the suggested alternative routes means most workers would get to work already tired and exhausted. Staying in traffic for hours means that performance and productivity would be affected, task assigned which will help drive organizational growth within the private sector, might lag due to low performance and productivity which can precipitate emotional and psychological stress occasioned by the unconventional routes plied by employees for the period of closure.

Uwaleke further noted that the event will put pressure on alternative routes and infrastructure resulting in faster wear and tear. Prices of products and services will likely go up from the higher cost of transportation, he said, adding that traffic jam will worsen and, therefore, the manhours spent in heavy traffic will decrease productivity and will cause health challenges for several Lagos residents.

Historically, Lagos is the major financial and economic hub of Africa, a megacity with the fourth-highest GDP in Africa, generating about 10 per cent of Nigeria’s GDP and housing one of the busiest and largest seaports on the continent. The state houses a central downtown characterized by the popular Idumota and Balogun markets, major commercial and financial business corporations, banking institutions, among others which are majorly located on the island vicinity and separated by bridges from the mainland vicinity.

Uwaleke sees far-reaching consequences in this 6-months closure of the bridge. “Against the backdrop of the pandemic, the closure will roll back economic activities in Lagos State and by extension the internally generated revenue of the state for the period of the closure. Considering that the bridge may be a major link within the state with heavy traffic, the resultant decline in economic activities and consumption will negatively affect the revenues usually shared by the three tiers of the state through VAT,” he stressed.
The fact that the six months rehabilitation exercise extends into Christmas and New Year also presents its own challenges however, including the fact that traffic can be unusually heavy during this time and lead to increased frustration for commuters.

In conclusion, there is no doubt that the closure of the Third Mainland Bridge in Lagos will bring with it untold hardship on the people, as they try to grapple with alternative routes listed by government officials. However, at the end of the day, those who will carry the burdens that will come with the closure of the bridge, will include not only the citizens of Lagos State, but the state itself whose economy no doubt, should be prepare to take a big hit from the extreme difficulty it will place on the people.

One big lesson that it brings home, is that the government, both federal and Lagos state, needs to pay greater attention to its mass transportation programme.

Unease at AFC over new CEO after strong ’17 results