The Lagos State government, on Monday, flagged off the coconut shell art and craft training of not less than 1000 youths and women at the Farm Service Centre, Agege, Lagos themed under the “waste to wealth” programme being facilitated by the Lagos State Coconut Development Authority (LASCODA). 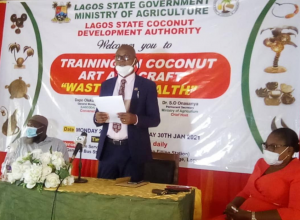 Abisola Olusanya, the Lagos State commissioner for agriculture, represented by Dapo Olakulehin, general manager, Lagos State Coconut Development Agency stated that the programme is a subset of the Lagos State Ministry of Agriculture targeted at creating job opportunities and entrepreneurial empowerment to over 15,000 youths and women through agriculture-based skill development programmes.

Olusanya noted that the coconut art and craft training to be conducted in 10 batches consisting of 100 individuals per batch, is practical-oriented whereby the successful trainees will be given the opportunity to be certified by the Entrepreneur Development Institute (EDI) under the auspices of the Central Bank of Nigeria (CBN) for accessibility of credit facilities for expansion of their trade.

The commissioner further stressed that the immediate outcome of the training is the provision of sustainable sources of livelihood, income and employment generation to youths and women in the state.

The commissioner reiterated that sustained sensitisation and awareness campaign by the current administration in the state portraying the economic and environmental potentials of coconut has started yielding results to the extent that private sectors and international partners have begun showing genuine interest in the value chain.

Highlighting coconut expansion projects facilitated by the state government, she stated: “This year, a 10,000MTPA (metric tonnes per annum) coconut husk processing factory is being proposed for Badagry under Public-Private Partnership arrangement. The factory when operational will generate 1,000 and more than 3,000 direct and indirect employment opportunities respectively. Discussion is also at an advanced stage with a private sector on creation of 10,000 jobs from the Eko Coconut Bread Initiative. In addition, the Food and Agriculture Organisation (FAO) of the United Nations visited Mr. Governor at the tail end of year 2020 with the objective of having an intervention mission on Coconut Value Chain Development in Lagos State.”

She further disclosed that the state government is working effectively towards possessing 10 million active and productive coconut trees for sustainable supply of raw materials to coconut based industries, as well as, increase the transactional capacity of the coconut value chain from the current N76 billion per annum to N350 billion per annum within the next five years.

Addressing newsmen at the event, Dapo Olakulehin said the first batch of the training, which started on January 25, is a 5-day training aimed at creating sustainable job and entrepreneurship opportunities for youths and women passionate about arts and craft making.

He added that the training is an empowerment avenue for the youths to fully entail theoretical concepts and intricate practical sessions aimed at reforming the use of coconut shells, erroneously considered a waste product in coconut processing.

The LASCODA general manager further noted that asides the training, the state government has engaged and supported coconut growers and stakeholders across the 57 Local Council Development Areas (LCDAs) by continuously distributing improved coconut seedlings targeted at revamping the coconut industry, including rehabilitating the coastal belts through coconut cultivation.

Benjamin Abimbola, one of the registered trainees expressed pleasure over the opportunity to learn the unique coconut art and craft for free.

Stating her expectations, she said the programme is an avenue to expand her knowledge and skills and also strengthen her entrepreneurial goals as she personally intends to master whatever she learns from the training and eventually create a craft business of her own.