By Samson Echenim
The Tin Can Island Port in Apapa, Lagos is witnessing an influx of smuggled goods, following the closure of land borders in August. 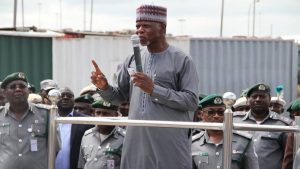 Comptroller general of Customs, Hameed Ali, a retired colonel, on Tuesday, unveiled sections of contraband and wrongly declared importations at the Tin Can Port, with duty paid value (DPV) of N2.7 billion, signalling a new high in recent smuggling activities through the port.
The seized goods shipped in a total of 54 containers, included 33 containers of parboiled rice with expired dateline, hidden in vehicle spare parts, four containers of vegetable oil, two of used tires, 11 containers of restricted drugs, which were largely Tramadol and one container of used cloths.
“These seizures are typical goods that are usually smuggled into the country through the borders. So, if the borders were not closed, most of them may have entered into Nigeria,” Ali said.
“The closure of the border has forced the smugglers to use the seaports in Lagos. We can see that one significant finding about this seizure is that the rice is expired or about to expire. Also remarkable is the seizure of tramadol variants and unregistered performance enhancing drugs, ” he noted.
According to the Customs boss, the Tin Can Port seizures confirm the position of the Nigeria Customs Service that most of the imported rice are expired and not fit for consumption.
“The grave consequences of consuming this rice and the tramadol can only be imagined than experienced,” Ali added.
“I must commended the officers and men of the Tin Can Island Customs Command for this feat. Smugglers and dubious importers must retrace their steps or face severe consequences, as the Customs Service remains at alert and very much alive to its duties of trade facilitation and regulations,” Ali warned.