When the hammer went down on Helmut Fallmann’s second bid on a lot of limited-edition bottles of Tuscan wines, his cellar increased by eight bottles, while his bank account decreased by $22,000.

Fallmann, an Austrian technology entrepreneur, flew to New York City this spring to participate in Ornellaia’s Vendemmia d’Artista, a charity auction in its ninth year that commissions artists for special-edition bottles. This year’s edition, organized by Sotheby’s, took place at the Solomon R. Guggenheim Museum, and included a reception and gala dinner.

Fallmann, 51, is part of a sector of wine drinkers who, in addition to buying off the shelf for everyday drinking, use wine auctions to pursue particular and sometimes elusive bottles.

With a preference for Italian and Left Bank Bordeaux wines, and large-format bottles (magnums, double magnums and imperials, in wine parlance), Mr. Fallmann estimates his cellar at more than 2,000 bottles. He started purchasing through auctions about five years ago and noted, “It is a great way to complete my collection.”

While he researches on his own, he also registers his interests with auction houses such as Sotheby’s and Munich Wine Company, an online auction site, and relies on personal relationships in the wine industry to advise him on purchasing events.

“If you’re at an enjoyable level of drinking wine, it makes sense to stick to your local market, but if you’re focused on specific wines, it makes sense to participate in auctions,” said Jamie Ritchie, worldwide head of wine for Sotheby’s.

Ritchie noted that Bordeaux and Burgundy remain the most important areas for collectors, but there is increasing demand for wines from Napa Valley, France’s Rhone Valley, and Italy’s Piedmont region.

Collectors who buy at auction often do it for both prestige and the investment potential. And if they’re buying wines at auction to drink, it’s often for a special vintage, like their birth year, or an event such as a collectors’ dinner themed around a vintage or a region, said John Foy, owner of the Wine Odyssey consultancy, who buys wines at auction for private collectors.

“All the collectors I know drink well (the base line) to very well, to way beyond normal wine drinkers,” he said.

Auction houses like Sotheby’s, Christie’s and Bonhams—three of the world’s most venerable with a collective 749 years of experience—have specialists who handle private collections of wine and rare spirits such as those from Scotland and Japan coming on the block in the United States and elsewhere. Ritchie said within the business, the usual reasons for a jettison are “the three Ds: Divorce, Death or Debt.” However, he added, “We get most of our [inventory] from people who end up acquiring too much and realize they have more than they’ll ever be able to drink.” 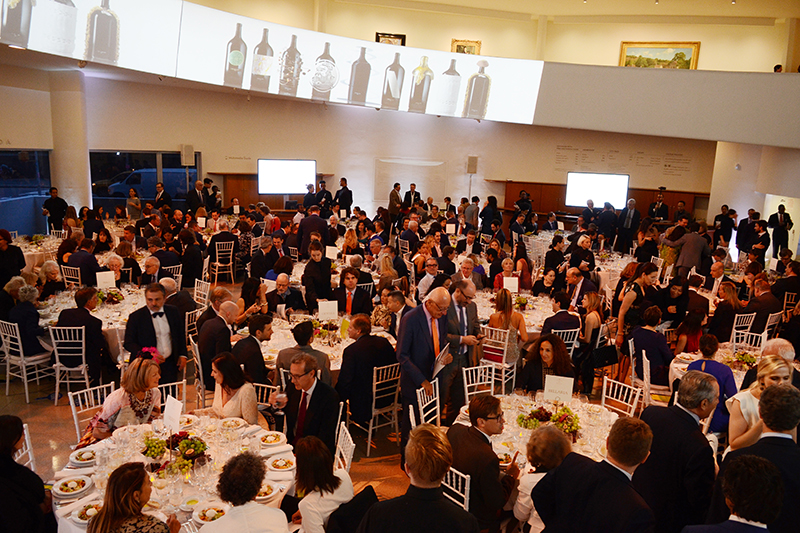 Once specialists know a collection might come into inventory, for example from a private collection, a wine estate or a restaurant going out of business, they can query buyers with those predilections.

“I have a pulse on who’s collecting now and if they’re amassing large collections, I can start to work with them on that,” said Erin McGrath, a senior specialist in wine at Bonhams. Spokespeople at three international auction houses said it was difficult to estimate the number of luxury wine consumers on the market, citing proprietary relationships and the lack of an industry definition on what constitutes “high-end” consumer.

Have a weakness for wine? Here’s what it takes to own a vineyard 🍇🍷 #DreamHomes https://t.co/IeKuKxovbh pic.twitter.com/8N1AJTEPuZ

The pre-sale activity ushers in the event itself, which bidders can participate in a number of ways, though none surpass the live auction for its suspenseful completion.

“There’s a lot of drama and ceremony in live auctions,” said Scott Torrence, the Los Angeles-based senior wine specialist for Christie’s. “There’s a level of bravado that you sometimes miss in non-live auctions.”

But for those who cannot attend, there are other methods: absentee bids, registering bids with the house ahead of time, phone bids, live auctions via the internet, or bidding by proxy. Sotheby’s and Christie’s recently launched smartphone apps.

“Because of the internet and our capabilities of accepting bids on our online platform as well as phone and absentee and live—there’s no limit to where the customer can live,” Ms. McGrath said.

For anyone wanting to build out their collections, auctions offer the best opportunity for acquiring rare bottles that have been vetted by the house specialists. Though bottles are inspected for issues such as cork leakage, and the cellars whence they came inspected for storage conditions, there are no guarantees about what’s inside the bottle. And, unlike a retail store that will accept a return of a faulted wine, once the hammer goes down, the bottle is yours.

“There’s a risk involved—no question,” said Jerome Zech, CEO of winebid.com, an online auction site that specializes in one-off collectibles. Mr. Zech also sends specialists to inspect the storage conditions of potential auction bottles. “There’s no way we can say it’s perfect. Six percent of wine is corked—that’s a fact. But we can say it’s been stored properly.”

Mr. Torrence added that it’s best to “come to the secondary market with an understanding of the history, and the chateaus and domains.” And he encourages buyers to attend pre-auction events where they learn about the collection and sample wines that represent what’s on offer, meet a specialist and other collectors

Specialists from all three houses advise consulting pre-sale catalogs, understanding all the economics—including commission, which can range from 20% to approximately 23% of the sale; sales tax, depending on the buyer’s state or country; and shipping costs, which vary by location, but can range between $50-$150 for a case, depending on type of service (buyers must also check the laws of the destination state to receive wine). Foreign buyers must also pay insurance, import charges, taxes and duty.

Aside from understanding the ancillary costs, experts advise that buyers understand their return on investment. Young vintages often are too readily available on the market to fetch good prices for at least five to 10 years said Ms. McGrath, the Bonhams adviser. And even reliable categories such as classed-growth Bordeaux or Burgundy won’t show their optimal ROI until the market adjusts, and the inventory is gradually depleted.

“Wine is finite, and only so much of it exists [from] each vintage; inevitably its availability will decrease over time as people collect and consume it,” she said. “Wine collecting rewards the patient.”

John Foy, owner of the Wine Odyssey consultancy, offers this advice for building out a cellar. For four years Mr. Foy purchased, at auction, an estimated 55,000 bottles of wine for the cellars at Restaurant Latour at the Crystal Springs Resort in Hamburg, New Jersey. He was directed by the resort’s late owner to “build the largest cellar in the country.” And, so he did.

• Start out with just a few things you like and let your palate develop over a couple of years.
“Do not spend your budget now…. As you collect wine, your palate is going to change. You don’t want to buy $15,000 of cabernet and find three years from now you don’t like those,” Mr. Foy said.

• Allocate about $5,000-$7,000 for the first year of investing.
For the average person, that’s enough to start out and get a variety of wines—red, white, sparkling and dessert—and get into the understanding of wine collecting. Then watch what you like and look into your cellar and see what you’re not drinking. Move on.

• Buy (and sell) with economic and seasonal cycles.
Selling your rare bottles in December and January, when certain industries bonus out, may yield a better price than other times of the year. Conversely, buying when your competition might be distracted—summer and the beginning of the school season—may result in getting those prized bottles.

• Invest in a carpenter or skilled tradesman to build your cellar and include proper shelving/racks, insulation and a temperature-control unit.
“Unless you’re very handy, you really shouldn’t do that on your own because you’ll ruin all your wine investment when you discover three years down the road, the room didn’t hold its proper temperature.”

• Consider professional off-site storage for your prestige collections.
“I have a substantial collection of DRC, Lafite, and other first-growth wines and I could not rest at night knowing these wines were in my cellar at my [weekend] house,” Foy said..