Taiwan, Japan and Slovenia lead in a survey of 43 countries where companies are ramping up their hiring after a year of political uncertainty and upheaval, according to Manpower Group Employment outlook.

The survey done in conjunction with Insider Business indicates that companies in 39 of 43 countries surveyed said they anticipate increasing their headcounts, with the strongest hiring intentions coming out of Asia and Eastern Europe.

Business Insider took a look at net employment outlooks for each country surveyed and run down which nations boasted the greatest anticipated growth in hiring.

The Asian country of Taiwan is seen as one of the best places in the world for expats looking to grow their careers and is fast becoming a hub in the continent for tech and finance jobs. It scored a polled 24 percent.

Japan with 23 percent ranks second and it is noted for having one of the strongest levels of hiring confidence amongst businesses, thanks to its vibrant corporate culture in places such as Tokyo. 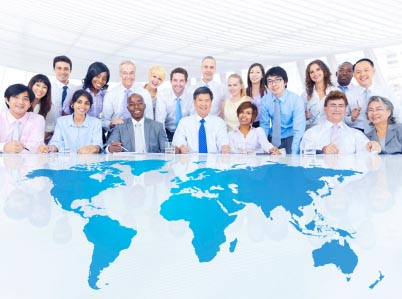 Slovenia an Easter Europe country came in the third place with 22 percent followed by India with 18 percent.

While Western Europe employers are less confident about hiring intentions than the rest of the region, in Slovenia and Eastern Europe, companies are looking to expand in fields such as technology.

India, one of the fastest growing developing countries in the world, is continuing to hire more staff across a range of sectors such as professional services and manufacturing.

According to the report Hungary scored 17 percent and it is adjudged the country with one of the lowest cost of living in Europe and is also a place where the jobs market is buoyant.

The United States equally scored 17 percent and it is perceived that companies would start rapid hiring again now that now that US elections are over.

The survey indicated that Romania at 16 percent is becoming a draw for companies looking to expand in Europe as cost of living is very low and wages are comparatively low and quality of living is meant to be ample.

Although Hong Kong may be one of the most expensive places to live in the world, its position as a financial hub for Asia is seen as a gateway for financial services in mainland China.

The other destination countries for job seekers are Bulgaris, Guatemalia and New Zealand.

Over the last year, Britain voted to leave the European Union, Donald Trump became the new US President, and populism has been spreading across Europe. It has caused great uncertainty for companies and many have held off on expansion plans until now.

Brexit caused companies in London and Scotland to hire people at a much slower rate than other major cities around the world, for example. But the tide is turning as more companies are looking to hire in the near term.