This time of year, cities around the world embrace the festive and jolly spirit with glimmering lights, handmade décor, and regal Christmas trees. Annually, travel lovers celebrate with warming mulled wines, craft beers, and candied everything while shopping for the gifting season. We have put together our favorite, pretty-as-a-postcard Christmas markets for your travel bucket list.

Travel to Love Park in Philadelphia, which resembles the conventional Christmas Markets in Germany. Merchants and artists in over 80 stilted booths offer traditional European cooking, chews, candies, and beverages.

Christmas Village offers a nostalgic shopping experience with both foreign and domestic holiday gifts, favors, ornaments, embellishments, jewelry and upscale art and crafts. The exceptional ambiance with thousands of lights and the delicious aroma of gingerbread, waffles, bratwurst and spiced wine will get the entire family in the mood.

Christkindlmarkt is one of the nation’s oldest German Holiday markets, celebrating its 20th season this year. It is famous for bringing tradition and local flair to the Holiday Market sequence. More than one million locals and travel lovers stop by the downtown Daley Plaza location. A special Kinder Club offers activities for children, including a scavenger hunt and life-size advent calendar.

Located in the heart of Chicago’s downtown, this outdoor market is inspired by the 16th century German holiday market, the first of its kind, in Nuremberg. Christkindlmarkt is known for high-quality gifts and food, holiday cheer, German wistfulness, and a place for families to start their very own Christmas traditions.

The Downtown Holiday Market in our nation’s capital, Washington DC is one of the top ranked holiday markets in the country. Now in its 11th year, the D.C. market may attract as many as 100,000 shoppers and travel lovers in a weekend, and holds almost 200 sellers who vend everything from fine artistries down to imported snacks.

The Downtown Holiday Market is committed to sustainability and the whole bazaar is run on bio-deisel and all of the promotional material is printed on post-consumer recycled material, many of the vendors follow suit, and many of the goods and gifts are recycled as well. Von Friedeburg exhibits there, selling traditional German foods, including hard-to-find sweets.

Helsinki Christmas Market is found in Senate Square and is the oldest and most well-liked Christmas market in all of Helsinki. If you travel to this historic area of Helsinki, you’ll find that it has become the home for many events and festivities throughout the year and is noted for the magnificent snowy, white, and frosty cathedral overlooking Senate  Square.

Helsinki Cathedral is one of the oldest buildings in Helsinki and an impressive example of neo-classical architecture. It is on the steps of the cathedral that the newly crowned St Lucia, a young woman dressed in white, descends each year on December 13th. A folklore tradition chartered from the 4th century Italian Christian martyr, it has become an emblematic and symbolic occasion for the Finns and is something that you cannot miss when you travel here.

There are more than one hundred stalls at Helsinki Christmas Market offering beautifully-crafted gifts, ornaments, as well as locally-grown produce and prepared meals. Santa Claus also visits daily and an old-fashioned merry-go-round spins in the centre of the square, providing free rounds for children along with a free spell of nostalgia.

Although there are several contendors for the crown of Germany’s most recognized Christmas market, the Christkindlesmarkt in the medieval city of Nuremberg can post a pretty strong claim. Dating back to 1628, it exemplifies all we have come to associate with the more esthetic and elegant take on the festive season. Perfect for winter travel!

The main market, held in the city’s largest square, Hauptmarkt, boisterously hums with guests enjoying the sounds, insignia, and excellence of the handcrafted goods on sale (mass-produced goods are strictly forbidden, which we LOVE at Ecophiles), while fending off the cold air with glasses full to the brim with Glühwein and homemade German gingerbread. A Christmas Spirit lightens proceedings, and there is also a special Children’s Christmas market on the Hans-Sachs-Platz. Nuremberg also vaunts a toy museum, and of course, the infamous rally grounds.

If you’re interested in architecture then Cologne Christmas Market is the one for you. It boasts a spectacular German Christmas market experience, taking place in the Cologne Cathedral, the magnificent Gothic edifice which took more than six centuries to finish; and to this day is still the area’s defining feature.

Travel to the ‘Am Dom’ market in the square directly in front of the cathedral where you’ll find a legendary tall Christmas tree as well as many adaptations on the theme with the emphasis in other, smaller markets fluctuating from lore to ‘Heinzelmännchen,’ which are the infamous gnomes of Cologne. Although one of the oldest markets, Cologne is one of the most conscious forward markets with one of the markets specifically for gay and lesbian people. 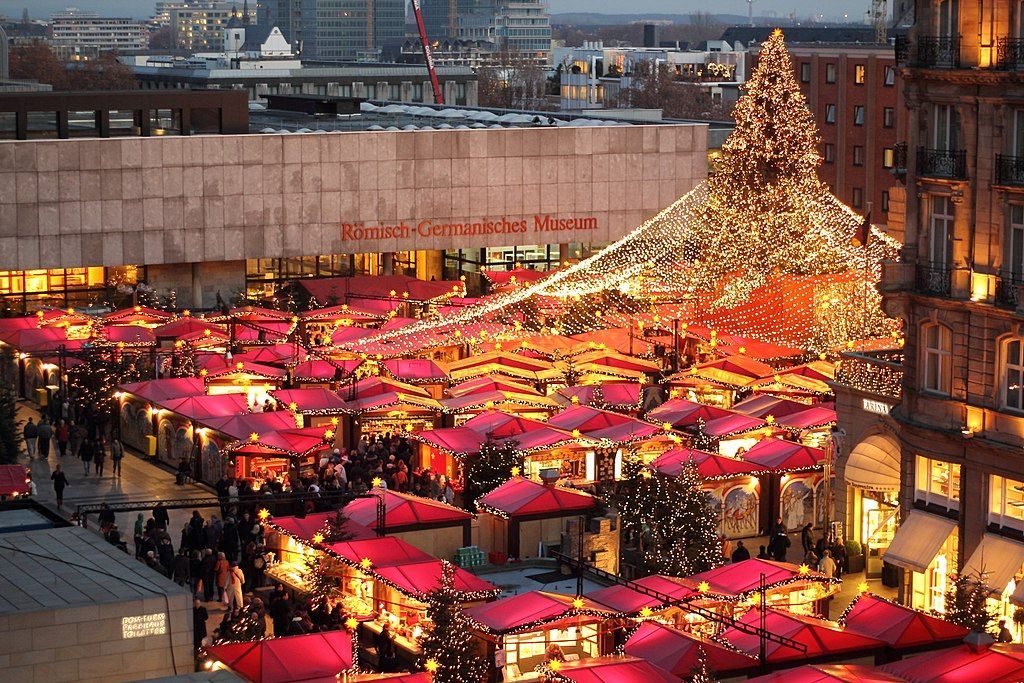 The variety of food and beverages sold at the market is very plentiful and often lavish. Travel here for traditional Czech food such as homemade muffins, beer, mulled wine, mead and other distinctive fortes from Old Czech cookery.

It’s mostly the handmade blacksmith’s ware, glass-work ware, wood carved toys or confections which are sold at the Market. You can buy almost every sort of Christmas goodies such as stocking stuffers, chains, and ornaments. Christmas Carols are sung daily by various local performers. This is one of those Christmas markets that will make sure you know Christmas is coming, and cheer is not near… it is here.

The Bath Christmas Market is an annual event that many people travel to from far and wide. Bath is city of history, culture and, towards the end of the year, Christmas markets. Bath is preparing to hold the biggest market yet in 2017.

Over two hundred vendors will sell variations of hand made gifts, food, and decorations. The Christmas Market is held in Bath’s City Centre. Bath boasts local artwork, handmade ornaments, bespoke jewelry, housewares, toys, gifts for pets, festive food and drink and also fine stationary and aromatherapy products and oils. Over 80 percent of the ready made food and produce comes from the local area, meaning that it is truly a market of the South West in the United Kingdom. The market will also offer small play productions and musical entertainment.

The Worcester Victorian Fayre is celebrating its 25th anniversary this year! Worcester’s Victorian-themed street market boasts that it is unlike any other and the leading market in the greater Midlands region! The ambiance and setting is made to make guests feel as if they tumbled back in time as you stroll amongst the 200 stalls that offer everything from sparkling jewelry to festal home decor, as well as tasty eats and treats including staple mulled wine and roasted chestnuts.

Over 200 vendors decorate themselves and their booths in Victorian gear in an attempt to give the atmospheric Worcester streets a Victorian and jolly heartbeat, if only for a couple days. There is plenty of theatre, dance and singing as well as a couple juggling stilt walkers.

Quebec City is one of the oldest cities in North America founded in 1608 by the French Settlers. In the weeks before Christmas, the aroma of pine-needles, home made maple syrup, and pies wafts above the streets of this historic centre where the nouvelle-French architecture shimmers and glints with hundreds of lights.

At Le Marché du Vieux-Port on Quai Saint-André traders sell hand-made decorations, woollen scarves, and tourtiere, a pie eaten in Quebec around Christmas and Thanksgiving. The market runs concurrent with the Quebec City Lights Festival, which symbols the winter solstice on Dec 21. More brilliant lights along with ice-sculptures, can be found at the Festi Lumière in the city’s aquarium, in the heart of the city. In the first half of December, Quebec also throws a German-style market while those in the hunt of inspiring Christmas presents should direct their attention to the city craft fair held between December 12 -22. Here you can find winter furs, intricate hand made jewelry, and hand thrown pots.

Held in the city’s historic Distillery District, the Toronto Christmas Market offers all the charm and magic of a customary German market with a couple of Canadian twists. Locals and travel lovers are treated to accompaniments by Bavarian bands, organists and folk dancers from Ukraine and Slovenia. There are festal bars and beer gardens serving hot rum, mulled wine, craft beer, and Christmas cocktails.

You can try tasty pierogi (Polish dumplings), and fried onions or poutine, which is a delightful combination of French fries, gravy and soft cheese-curds. Toronto’s market also has a real life gingerbread house along with stalls selling Canadian beeswax candles, wooden toys and other traditional gifts. St Nicholas himself appears on Dec 5th amid a colorful procession and a World Caroling Challenge is due to be held on the final day of the market.

So during the season of giving and gifting, give back to yourself. Ecophiles believes you deserve it. Treat yourself, and treat others at these gorgeous Christmas markets when you travel.