Global: Global markets were largely bearish this week, with pockets of buy-side activity in select markets. Starting in the Asian region, the Hang Seng and Shanghai Composite were beaten down this week, as they fell 4.09% and 3.87% respectively, while the Nikkei-225 posted a modest 0.04% w/w gain. Sentiment in the Asian-pacific region were weighed down as the Ukraine – Russia Crisis continues, as well as the latest COVID outbreak in China and their collective impact on the economy. On the macro front, Japan saw industrial production rise 2% in February – according to the country’s Ministry of Economy, Trade, and Industry (METI). Moving to Europe, the mood was more upbeat as major markets traded in the green, driven by investor expectations of stronger earnings from listed firms. The German Dax was up 0.58%, with the French CAC and Spain IBEX up 0.40% and 1.33% respectively, whereas the London based FTSE-100 was down 0.50%. Investor focus was on the Eurozone economy, where industrial production from February rose 0.7%, surpassing expectations. with trade deficit easing to €7.6 billion. Finally, in the U.S., earnings season remains in focus with American Express, Schlumberger, and Verizon among others reporting Q1’22 earnings this week. Tech stocks were the worst performers this week, with the NASDAQ down 1.24% at time for writing, while the Dow Jones and S&P 500 were up 0.77% and 0.07% respectively. American Express saw Q1’22 revenues rise 29% y/y to $11.73 billion, while Schlumberger Limited saw Q1’22 revenues rise 14% y/y to $5.96 billion, with PAT up 70% to $510 million.

Domestic Economy: Going by March’s Consumer Price Index report, Nigeria’s headline inflation rose for the second time in a row. The uptick to 15.92% y/y was predominantly driven by fuel scarcity and high diesel prices, which raised the cost of storage and logistics. Recent data from the National Bureau of Statistics (NBS) confirms that, in March, the prices of Premium Motor Spirit (PMS) and diesel increased by 8% m/m and 73% m/m respectively. As high energy prices dovetail into the current month, we see room for further upticks in inflation. In addition, Easter and Salah Celebrations could contribute to increased demand for food. However, high base effects and frontloading in March could soften inflationary pressures in April.

Equities: Broad based gains across the NGX saw the all-share index rise 2.00% w/w, taking its YTD performance to 13.44%. Investors remain keen on players in the Oil and Gas space, evidenced by the 6.36% w/w return. ETERNA lead all gainers in the space rising 33.00% w/w to settle at ₦6.65, with SEPLAT rising 4.57%, to settle at 1030, a new all-time high for the stock. Up next, players in the Consumer Goods space enjoyed significant patronage this week, as the sector rose 3.31% trimming its YTD performance to -1.37%; INTBREW rose 7.14% to settle at 5.25% with NB and FLOURMILL rising 8.34% and 4.58% respectively w/w. Moving to the industrial good sector, buy-side interest in DANGCEM and WAPCO saw the sector rise 1.65% w/w. Finally, it was a green close for the Banking sector as it rose 0.39% w/w, following weeks of sell-side action after FY’21 dividends payments and earnings releases.

Fixed Income: Bearish sentiments dominated the fixed income this week. In the bond segment, while most participants remained on the sidelines in anticipation of the upcoming bond auction on Monday, minimal sell-side activity caused average yield to rise 13bps w/w. Meanwhile, we saw sell-offs in the OMO and NTB segments as investors sought higher returns, resulting in an increase in average yield to 20bps w/w and 31bps w/w, respectively.

Equity market: This week’s impressive market performance saw the oil and gas sector contributing the most to the positive close with a gain of 636bps as investors bought up OANDO and ETERNA. We anticipate a mixed session to start off the week amid slight profit taking activities across board.

Fixed Income: Next week, the bond market should trade on a muted note as investors await the outcome of the bond auction on Monday. We also expect the T-bills segment to trade on a quiet note due to a dearth of bids in the market.
Currency: We expect the naira to remain largely stable across the various windows of the currency space as the CBN maintains interventions in the FX market.

According to the National Bureau of Statistics (NBS), headline inflation increased for the second time in a row. This is evident in a higher monthly headline inflation outcome of 1.74% m/m in March vis-à-vis a 1.63% m/m figure in February, reflecting the passthrough of fuel shortages and high diesel prices.

On a year-on-year basis, headline inflation increased to 15.92% y/y in March, 9 basis points (bps) above our in-house estimate (Vetiva: 15.83% y/y). This contradicts the consensus expectation that headline inflation should have fallen on account of high base effects (Bloomberg consensus; 15.66% y/y). We note that although the average price of PMS was slightly lower in the current year (March 2022: ₦172.0/litre) than a year earlier (March 2021: ₦172.67/litre), the factors which informed higher inflation in 2021 (hoarding and an artificial food blockade) were resolved more quickly than the current scenario, which has persisted for some time.

In March 2022, consumer prices reeled from off-spec PMS imports, ensuing fuel shortages and high diesel prices, which was compounded by power blackouts. The lag in restoring normalcy, which coincides with a period of rising oil prices, was the major cause of the higher inflation outcome. 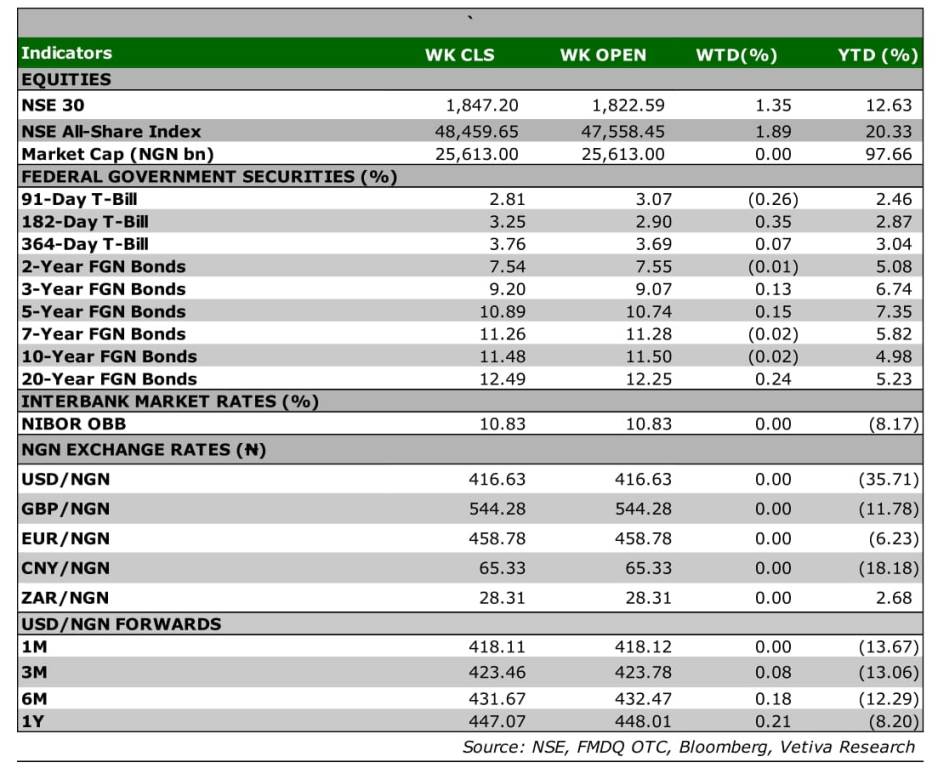 Food inflation nudged 9bps higher to 17.20% y/y (Feb’22: 17.11% y/y). We attribute this to demand frontload ahead of the festive season, as well as the passthrough effect of high energy prices. Food is widely transported by diesel-powered trucks, and with diesel prices at an all-time high, it is bound to affect the market prices of such products.

Core inflation remains rangebound due to high base effect

Core inflation, which captures non-farm produce, fell slightly to 13.91% y/y, down 10bps from the previous month (Feb’22: 14.01%). Core inflation has remained within a tight range of 13% – 14% within the past 11 months, reinforcing our view that there is a tussle between base effects, foreign exchange, and energy pressures. In addition, we note that despite the slight decline, all the constituents of non-food inflation (excluding health) recorded higher pressures on a month-on-month basis, reflecting the passthrough of the PMS shock and elevated energy prices. The highest pressures were observed in the prices of clothing and footwear items (16.08% y/y), transport (15.37% y/y), household furnishings and equipment maintenance (15.07% y/y), alongside others.

As the month of April ushers in the Easter celebration and Ramadan fasting season, we expect these religious activities to raise consumer demand. The combination of holiday-driven demand amid the energy crisis could keep inflation elevated in April. Thus, we anticipate a slight increase in headline inflation to 16.0% y/y. For the broader year, we have an average headline inflation estimate of 15.0% y/y (2021: 16.98% y/y). Upside risks to our estimate include domestic food supply shocks, new rounds of devaluation and removal of petrol subsidies.