Mercedes still has its sights set on delivering solid returns next year even if the global economy continues to take a turn for the worse. 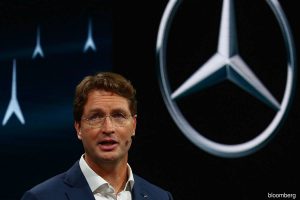 “If we end up in an economically-challenged environment, our goal is to still, in that environment, produce robust financial results,” CEO Ola Kaellenius said in an interview at the Paris auto show. “Whether it’s rain and thunder and a hailstorm at the same time.”

Mercedes is broadening its full-electric lineup with the EQE crossover that will take on Tesla’s Model Y in another step toward the automakers goal to go all-electric by the end of the decade.

In May, the luxury automaker outlined operating margin goals of 14 percent in a favourable environment by 2025 and no lowers than 8 percent in poor conditions.

The push, which hinges on moving it s portfolio upmarket, is meant to convince investors the company can whether economic cycles and lead to an improved valuation.

Automakers have gone through a number of setbacks since the shock of the pandemic and the related supply-chain disruption that is now easing.

There is little reprieve as increasing economic upheaval, sky-high energy prices and China’s strict pandemic measures threaten to put off buyers. Still, many manufacturers such as Mercedes are working down burgeoning order lists and have not so far seen much of a shift in demand.

During the first quarter, returns rose to a record 16.4 percent as Mercedes shifted production to its most profitable vehicles, before slipping in the second quarter in part due to cost inflation.

Despite the luxury push, which includes a focus on more performance cars, Mercedes shares have declined 18 percent this year.

Unlike German peers Volkswagen Group and BMW, Mercedes has no dominant anchor investor that can fend off outside approaches.

“Our multiple is too low,” Kaellenius said. If “we can see the shore on the other side of the transformation, I’m convinced there is a lot of value to unlock in our stock.”

While Mercedes is seeking more luxury buyers, other automakers are taking steps to separate out their EV business in a bid to ignite languishing shares.

Ford in March said it’s separating its fast-growing EV operations and software development from the rest of the business while Renault is set to detail plans for a carve-out of its EV assets in November.

“There is only one Mercedes team,” Kaellenius said. “I do not want to create the psychology of here is the current team and here is the future team. That is the wrong psychology for how you play this ultimate team sport that is automotive.”