Car freaks have multiple choices to make as MG automakers are in the midst of launching a new family of electric vehicles based on an in-house developed modular platform, but the company hasn’t given up on internal-combustion engines just yet. 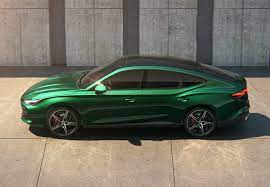 In fact, it’s just previewed via social media a stylish MG 7 sport sedan that will go on sale in China later this year with the choice of turbocharged 1.5- and 2.0-litre engines.

More details, including which wheels are driven, will be announced closer to the market launch, but sources suggest the 1.5-litre engine will deliver around 183 hp and the 2.0-litre engine will put out close to 254 hp. More powerful versions with plug-in hybrid powertrains are expected to be added to the lineup in 2023.

The original MG 7 was a rebadged version of the old Rover 75, which MG launched when it was still MG Rover, shortly after it was acquired by China’s Nanjing Automobile in 2005. Nanjing, along with MG, was then acquired by SAIC in 2007.

Interestingly, the design language of the MG 7 is the same destined for a modern MG sports car that’s in the works, possibly with electric power.

As there are no plans in place to introduce MG in the U.S., there’s little to no chance of the MG 7 turning up for sale here. It may also end up being sold exclusively in China, as MG focuses on its growing EV range in other markets where the British marque operates.