Muhamad Sabo-Nanono, minister of agriculture, on Friday, says the ministry will give priority to funding of agricultural research institutes above construction of structures. 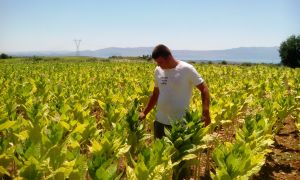 The minister stated this in an interview with newsmen while on tour of facilities at the National Animal Production Research Institute (NAPRI), Shika, Zaria, Kaduna State. He commended NAPRI for prudent management of resources, saying the institute had done very well considering the scarce resources available.
“They have managed these scarce resources very well and I believe if they can keep it up, they will improve on their performances,” he said.
On the issue of RUGA settlement for herdsmen, the minister said the idea was being re-accessed with a view to transforming the entire system.
“You have to understand that some states have already cued-in into the RUGA Settlement Programme; some thought it is a Fulani word, but its a rural grazing area created by the colonialists.
“People are just using it for whatever they think they will use it for; we have focused on this issue of grazing, there is no going back,” he assured.
On his part, Clarence Lakpini, a professor and the executive director, NAPRI, thanked the minister for the visit and his concern for the growth of animal production in particular, and the agricultural sector in general. He said the institute had worked out future plans to include staff training and retraining for capacity development, upgrading, and updating of laboratories, as well as infrastructural development, among others.
Lakpini added that the institute was liaising with the Federal Ministry of Industry, Trade, and Investment to encourage the participation of investors in the intensive production of livestock, dairy, beef, small ruminants, poultry and pasture. The director said the institute was determined to produce all-year-round pasture seeds using its dam, to meet the demands of stakeholders. He appealed to the minister to help in completing the construction of NAPRI dam and connecting the institute to 33 KVA electricity power line.
Businessamlive Website Stats