The implementation of a cluster concept model in Aba, the commercial hub of Abia State, will address myriad of challenges faced by artisans, especially finished leather and garment makers, that could lead to higher productivity from these trained hands in leather and garment production.

Such a cluster model will also provide an enabling environment and infrastructure to facilitate the growth and development of Abia State.​

An industrial cluster is the geographical location of group of artisans or manufacturers producing the same product, where enough resources and competences reach a critical threshold, giving it a key position in a given economic branch of activity, and with a decisive sustainable competitive advantage over other places, or even a world supremacy in that field (e.g. Silicon Valley and Hollywood in the United States). 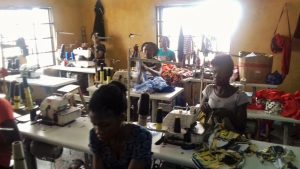 Clusters have the potential to affect competition in three ways: they increase productivity of companies in the cluster, drive innovation in the field, as well as stimulate new businesses in the field.

The present location of Aba finished leather operators in the Ariaria area of Aba, could be regarded as an artificial cluster, as it has no infrastructure that supports production. The location, which was originally a residential area, lacks constant power, an essential requirement for smooth production activities.

Tailors and fashion designers, on the other hand, though large in number, are scattered all over the city with each operator providing his or her own power and other amenities. ​

Consequently, there is a need for the Abia State Government to speed up the realisation of the proposed finished leather and garment industrial cluster, at Umukalika, in Obingwa Local Government Area of the State.

The location, which is about seven kilometres away from the Aba city centre, is sited on about 35 acres land and was projected to have been completed in the 2nd quarter of 2018.

Aba, the commercial hub of Abia State, has one of the largest concentrations of micro, small and medium enterprises (MSMEs) in Nigeria and a bulk of this number are engaged in leather works, steel fabrication and garment making, which could be attributed to the popularity of the city.

The ingenuity of Aba artisans, especially, the garment and leather clusters – comprising of shoe, belt and bag makers – attracted the United Nations Industrial Development Organisation (UNIDO) in partnership with the Federal Government, to set up a Common Facility Centre (CFC) in the city, to support the clusters to further develop their skills.

Shoe makers in Aba, had appealed to the state government to develop the proposed industrial cluster at Umukalika, in Obingwa Local Government Area of the State, to provide a more conducive environment for the sector to perform optimally.​ ​

They argued that their present location at Ariaria lacked basic amenities and so was not conducive for productive activity.

They explained that the finished leather sector (FLS) has capacity to shore up the state’s internally generated revenue (IGR), if basic infrastructure of constant electricity, good roads and water are provided.

Francis Chukwu of Frantonia Industries Limited, one of the leading shoe manufacturing firms in Aba, argued that for local producers to compete favourably at the international market, electricity and other infrastructure must be put right.

He stressed that epileptic power supply and multiple taxation were major challenges faced by real sector operators in Nigeria and urged the government to support the sector, which, according to him, holds the key to the industrial development of the country.

He explained that the present location of the Aba finished leather cluster was designed for residential purposes, and appealed to the state government to ensure the realisation of an industrial cluster for the FL sector.

The Aba finished leather (FL) sector, said to be the biggest in West Africa, with about 50,000 people directly engaged in the manufacture of shoes, belts and bags and a production capacity of about one million pairs of shoes per week, currently produces for local and international markets, although unofficially.

Aba made shoes and other finished leather products are popular in Cameroon, Côte d’Ivoire, Ghana and other West and East African countries.

Governor Okezie Ikpeazu in approving the establishment of clusters in Aba, said, “Our story as a people is one of entrepreneurship, resourcefulness and diligence. This is our pride. We have astounded the world with our homegrown technical skills, especially during a period of pervasive adversity, and followed it up with our trade and commercial prowess elevating one of our cities, Aba, into a prominent commercial hub within the West African region.

“This historic prominence is to become our future narrative. The time is ripe to use the over 110,000 shoemakers and 50,000 garment makers as a launching pad to enable Abia to truly become the undisputed SME capital of Nigeria.”

He stated that his administration was committed to providing the enabling environment and infrastructure to facilitate the growth and development of Abia and its people, positioning it as a premier residential, business and tourism destination, with the ultimate objective of uplifting the lives of the people.

He recalled that Aba was for many years a thriving hub for manufacturing and commerce until epileptic electricity supply and insecurity forced the shutdown of most indigenous and foreign owned industries.

Ikpeazu recognized and appreciated the efforts of the Geometric Power Group towards providing a solution to the perennial challenges of electricity supply to the state.

The governor observed that the forthcoming operationalisation of the plant, would provide a critical input towards the actualization of its blueprint and roadmap for the regeneration of Aba and the entire Abia State.