Moody’s Investors Service, one of the global credit rating agencies, Wednesday changed its outlook on Nigeria’s ratings to negative from stable. 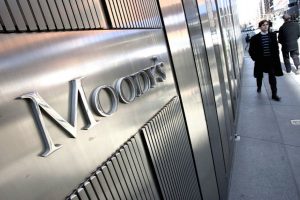 “As pressures mount, there is a risk that the government resorts to increasingly opaque and costly options to finance a moderate but rising debt burden.

“Moreover, vulnerability to an adverse change in capital flows is building in light of Nigeria’s increasing reliance on foreign investors to fund the country’s foreign exchange reserves.”

Furthermore, it pointed out that Moody’s decision to affirm the rating at B2 recognized a combination of credit strengths, including the country’s large and diversified economy supported by vast oil and gas endowments, notwithstanding persistent credit weaknesses such as its very weak institutions and governance framework and in particular poor public finance management.

“Concurrently, Moody’s has maintained Nigeria’s country risk ceilings at their current levels: Foreign Currency bond ceiling at B1, Foreign Currency deposit ceiling at B3, and Local Currency bond and deposit ceilings at Ba1.”
Moody’s also said the drastic reduction in Nigerian banks’ non-performing loans (NPLs) will help in reducing the risk of capital erosion from unexpected losses and lessens the need for loan loss provisions.

Nigerian banks’ NPLs reduced to 6.6 per cent at the end of October compared to the 14.1 per cent it was in 2018.
This was the first time the NPLs would drop to a single digit in the past 42 months.

But the rating agency’s banking analysts, Peter Mushangwe, in a note yesterday, described the development as credit positive.

“The Nigerian banking system’s non-performing loans ratio reduced to 6.6 per cent at the end of October from 14.1 per cent a year earlier, according to the central bank. This is credit positive, as lower NPLs reduce risk of capital erosion from unexpected losses and lessen the need for loan loss provisions. The improvement in asset quality is mainly due to banks’ growing loan books, write-offs and successful workout of exposures,” he stated.