…as Gov. Okezie sets up committee for a government shoe factory

With production over the years undertaken mainly by manual labour, using crudely fabricated machines, but greeted with a soaring demand, the Aba shoe industry is set to experience bigger business boom, beginning this year, as new set of shoe production machines that would modernise the industry, as well as increase product quantity, have been delivered in the much-neglected south-eastern commercial city. 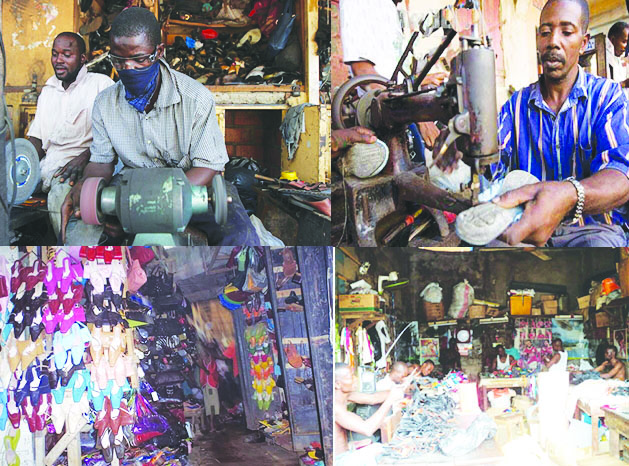 The machines were imported by a new core investor in the industry who came into the south-east commercial city about two years ago.

business a.m. was informed that Aba shoe makers, who are mainly members of the Association of Leather and Allied Industrialists of Nigeria (ALAIN) produce more than one million pairs of shoes weekly, with a membership strength of a little over 80,000.

This amounts to 52 million pairs of shoes produced yearly. With the average price of N2,500 per pair of shoes, the Aba shoe industry is worth some N130 billion.

Meanwhile, a soaring foreign demand of Aba-made shoes has been gaining traction in all of West and Central Africa sub-regions, with countries such as Gambia, Cote d’Ivoire, Ghana, Togo, Cameroun, up to Niger and Chad on the list of buyers.

It was gathered that every week, traders from these West and Central African neighbours storm the Aba industrial city to buy different product designs. One trader from Cameroun was quoted by one of the shoemakers that they (in Cameroun) find Aba shoes, leather bags and belts quite cheap, compared with foreign made ones that come in from Europe and Asia (mainly China).

Meanwhile, the Aba shoemakers are seriously challenged by inability to meet the soaring demands from mainly foreign buyers, due to their crudely fabricated machines which make much of the shoes to be manually produced. Added to this is the fact that majority of the shoemakers are not registered companies at the Corporate Affairs Commission (CAC). As a result, their exports are done informally, thereby making planning and tracking extremely difficult.

Also, all the shoemakers in Aba are small-scale producers, compared with their foreign counterparts. According to Ken Anyanwu, secretary of the shoemakers’ union, ALAIN [Association of Leather and Allied Industrialists in Nigeria]: “We in Aba have no good machines. We also do not have the enormous capital to expand our shoe factories.”

Anyanwu said funds were a major reason why majority of Aba shoemakers are not meeting demands; and usually overwork themselves each time they get orders from foreign buyers.

On its part, the Abia State government, apparently savouring the euphoria of being the host state of the now popular Aba shoes, is showing a more-than-passing interest in the industry.

According to Eziuche Ubani, the commissioner for Works and chairman of a newly inaugurated six-man committee on works and projects evaluation, the state government is establishing a shoe industry as a pilot project in Aba.

Ubani said the committee is to advise government on how to start it off. He hinted that the state government had taken delivery of machines to establish the shoe industry since December last year.

Nigeria, with a population of some 200 million people is said to have 131 million cattle, goats and sheep, according to 2011 figures from the Federal Ministry of Agriculture and Rural Development. These should provide hides and skin, major raw material to the shoe industry.

However, despite having higher number of shoemakers and higher cattle, goats and sheep population, Nigeria earns little foreign exchange from the industry when compared with Ethiopia, an East African economic giant, with only 56 million cattle.

The Africa Growth and Opportunity Act (AGOA), the US-Africa trade law that allows duty-free and quota-free access into the US market, said Ethiopian’s export (mainly footwear products) into the U.S under AGOA has increased by 62 percent between October 2017 and September 2018.

Also, statistics from the United States Agency for International Development (USAID) said Ethiopia exported $33.7 million worth of footwear products to the U.S in 2015, using the Africa Growth and Opportunity Act (AGOA).

However, some economic analysts who spoke to business a.m. are of the strong opinion that Abia state government should rather facilitate access to funds and machines for the Aba shoemakers; than planning to establish its own shoe industry.

The analysts said, it is a certainty that the proposed government-run shoe factory would die off after few years, due to poor management; as government is a bad business manager.