The Nigerian Civil Aviation Authority (NCAA) says lack of proper perimeter fencing of Bayelsa International Airport, leading to safety and security concerns was a major reason the aviation authority failed to certify the airport which cost the state government N60 billion for operation. 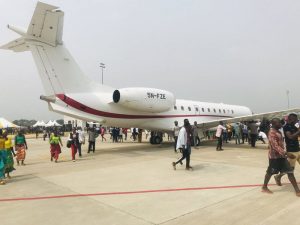 Abdullahi Sidi, director-general of NCAA, said the importance of perimeter fencing cannot be overemphasised as it is necessary to prevent encroachment into the airport vicinity.
Insisting on safety precautions, Sidi, who doubles as the director of operations and training, NCAA, said safety guidelines would not be ignored. He promised stakeholders that the Bayelsa Airport would be certified for flight operations only after the issue of perimeter fencing is dealt with.
He said, “Perimeter fencing is number one requirement for any airport, which is safety. Someone said the government had done about 60 per cent of the perimeter fencing and said the other side of the airport was creek,
but I say that is not acceptable to aviation industry. We have what we call the airside and the passenger side of an airport. The airside is supposed to be much more secured than the passenger side.”
The Bayelsa State Government opened the over N60 billion airport, known as Bayelsa International Airport, in February with an inaugural flight by the state governor, Seriake Dickson, from Abuja, followed by an Air Peace flight from Lagos.