FOREX Market
The Nigerian Naira held firm on Tuesday from Monday’s close of N510 and N411.50 to the dollar across the three sessions of the day in the parallel market and I&E window after it struggled to find its fair base marginally above N500 to the dollar in the streets from hitting a record high of N525 per dollar a fortnight ago. Most market participants maintained bids at between N400 and N412.90 to the dollar. 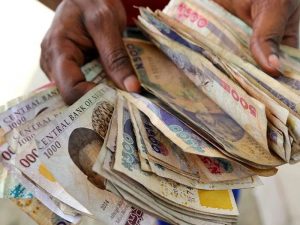 It was a cautious outing on Tuesday in the fixed income space as market traders protected their offers in anticipation of Wednesday’s scheduled Nigerian treasury bills auction by the Central Bank of Nigeria (CBN). Consequently, the treasury bills space closed on a bullish note as a result of strong buying interest across the medium-term and long-term maturities with each yield falling by three basis points and one basis point, respectively.
Also, the average yield across the curve declined by one basis point to close at 5.56 percent from the previous close of 5.57 percent, while the average yield across the short-term maturities closed flat at 3.18 percent. Yields on 11 bills compressed with the 25-Nov-21 maturity bill recording the highest yield decrease of five basis points, while yields on 10 bills remained unchanged.
As already planned for Wednesday, the CBN will hold its scheduled Primary Market Auction to roll over NT-bills maturities worth N51.50 billion across 91-day (N8.44 billion), 182-day (N16.06 billion), and 364-day (N27 billion) tenors.