In what is widely being interpreted by the local financial markets as a fresh devaluation of the Nigerian currency, the Naira, the Central Bank of Nigeria (CBN) quoted the Naira at N412.70 to the dollar on Friday, December 31, 2021, on its website leading to a 4.82 percent day on day depreciation to N435 to the greenback at the Investors’ and Exporters’ foreign exchange window, according to data from the FMDQ OTC exchange on Friday. 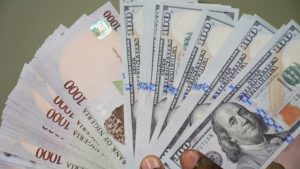 As a result the spot FX rate adjusted accordingly from N410.95 per dollar.

The devaluation has been carried out despite the stable and better position of the external reserves in the face of crude oil price stability, which analysts have noted will drive further accretion of the reserves in the new year, but may have been informed by the local currency continuing to face headwind pressures even at a time demand for the dollar is witnessing a slowdown as a result of year end activities as most FX users take to local travels within the country.
Analysts say the action by the CBN might just also be a response to an increased arbitrage opportunity with the widening FX spread, while speculative activities appear to have risen again, which would lead to a further weakening of the naira in order to reduce arbitrage, say analysts who have projected an increased demand for the dollar in the run up to Nigeria’s election in 2023.
At the start of 2021, the Nigerian naira traded at the parallel market for N470 to the dollar. Pressures mounted on the domestic currency in July 2021 when the central bank stopped weekly dollar supply to bureau de change operators.
With the current action by the apex bank, it means that in 2021 alone, it has devalued the Nigerian legal tender by over nine percent after it opened the year at an official rate of N380 per dollar, and closed the year at N412.70 to the dollar.
According to official data, the local currency saw its strength lowered to N410.16 mid-year, and the decision of the central bank to clip the wings of bureau de change operators followed when it said it was not going back at the September MPC meeting, owing to some alleged FX infractions by the operators.
The naira, consequently, further weakened on the street markets by about 20 percent closing at N560 per dollar on Friday and showing a significant tumble in value.
At the NAFEX segment of the foreign exchange market, the Naira was down to N435 to the dollar against the last close of N415 per dollar, as market participants maintained their bids at between N408 and N445.50 per dollar to close the year.
Businessamlive Website Stats