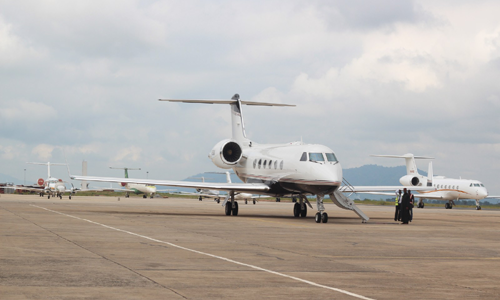 As the airport readies for reopening in April, the Nigerian Airspace Management Agency (NAMA) says it has successfully installed a brand-new CAT 2 Instrument Landing System / Distance Measuring Equipment (ILS/DME) to replace the old system which was installed since 2003.
The agency in a statement said it had also installed a very small aperture terminal (VSAT) for satellite communication at the airport.
“This satellite communication node has further been integrated into the national satellite communication network which is linked to the African Indian Ocean SATCOM Network (AFISNET),” NAMA stated on Monday.
The agency added that a successful site acceptance test on the equipment had also been conducted by NAMA engineers in Enugu in preparation for its calibration in the coming days.
Also liked to the VSAT is the newly installed Remote Control Air-Ground (RCAG) Very High Frequency (VHF) radio communication system, ensuring that Enugu now has an extended VHF coverage on 127.3MHz  frequency for Lagos South East sector.
Speaking on the gains of this latest installation, Fola Akinkuotu, managing director of NAMA, who noted that radio communication along the Lagos South East sector has “improved tremendously,” said the installation of the VHF radio in Enugu is “particularly significant as the city is strategically located to accommodate over six routes, both local and international.”
“Enugu being on a higher latitude can cover for Manfe entry/exit reporting point in Cameroun for international flights like Ethiopian, Rwanda Airlines, Kenya Airways, South Africa Airways and the like,” Akinkuotu said.
The NAMA boss revealed that the new installation has provided Aeronautical Fixed Telecommunication Network (AFTN) link that would enhance effective data communication for transmission of flight plans, NOTAMs and Aeronautical Communication messages, just as it has provided effective coordination between Enugu tower and Lagos Area Control Centre through the air traffic services/ direct speech for departing and arriving traffic ahead of time.
Businessamlive Website Stats