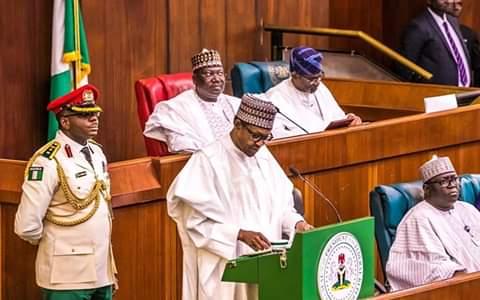 The National Assembly has transmitted the 2020 Appropriation Bill to the President, Major General Muhammadu Buhari (retd.) for assent.

The Senior Special Assistant to the president on National Assembly Matters (House of Representatives), Mr Umar el-Yakub, confirmed this to our correspondent on Thursday night.

Responding to a question on whether the national budget had been transmitted to the Presidency and when, el-Yakub said, “Correct; today.”

The presidential aide added, “And I am sure you know that the President will take his time to look at it all through before assent.”

The Presidency had on December 6, 2019 said Buhari and the Federal Executive Council would scrutinise the 2020 Appropriation Bill passed by both chambers of the National Assembly on Thursday.

The scrutiny, according to the Senior Special Assistant to the President on Media and Publicity, Malam Garba Shehu, is to detect if the lawmakers had padded the estimates in the national budget.

The Senate and the House of Representatives had on December 5, 2019 concurrently passed the 2020 Appropriation Bill, raising the total estimates from the proposed N10.33tn to N10.6tn.

The National Assembly had put a clause in the bill that the budget would run from January 1, 2020, bringing Nigeria back to a January-December budget cycle.

As part of the N264bn increment, the National Assembly raised its own budget from N125bn to N128bn.