Wharton management professor Stephanie Creary has been told to smile so often that the directive has become embedded in her subconscious, making her worry about whether she is coming across as an “Angry Black Woman” or a bossy leader to those she interacts with. 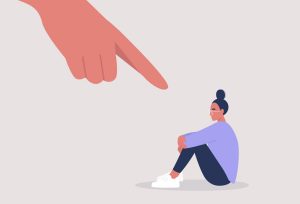 So powerful is this message, this microaggression, that last year she found herself assuring her students that she was smiling at them from underneath the face mask she was wearing in class. Later, she thought, “Gosh, it’s so deeply ingrained in me that I’m supposed to be smiling right now that I told the students, ‘I promise you I’m smiling right now.’”

Creary’s story is all too familiar to Lori Tauber Marcus, a Wharton graduate, corporate board member, and executive coach who spent decades in leadership roles at PepsiCo, Keurig Green Mountain, The Children’s Place Retail Stores, and Peloton Interactive. Marcus is co-author of the new book, You Should Smile More: How to Dismantle Gender Bias in the Workplace, written by six C-suite women who call themselves “The Band of Sisters.” In the book, the authors bring up some of the most common microaggressions committed against working women, including being relegated to the stenographer role in staff meetings (“Susan, could you take notes?”), or having their ideas dismissed and then offered up by male colleagues to enthusiastic reception (“Great idea, Greg!”).

“They don’t seem like a big deal, but over time they just exhaust women. And at a certain point, you just can’t help but disengage because it’s so exhausting,” Marcus said. “Worse yet, you can become marginalized because when someone says, ‘Did you meet the new girl in accounting?’ you don’t automatically think, ‘I bet that girl will be the CEO one day.’”

Marcus spoke to Creary during an episode of her podcast series, Leading Diversity at Work. They were joined by David Rivera, a professor of counselor education at Queens College-City University of New York, whose research focuses on cultural competency development, the effect of discrimination on the well-being of people from underrepresented groups, and microaggressions. (Listen to the podcast above. Find more episodes here.)

Rivera said stories like Creary’s and those relayed in Marcus’ book need to be told because microaggressions are often unintentional, stemming from an unconscious bias or stereotype. Talking about microaggressions makes them more apparent to those who don’t see them, and calling out the bias when it happens helps set everyone on a path to greater inclusion, he said.

Rivera shared a powerful story of his own, recalling a party invitation he once received from a college president that was addressed to “Dr. and Mrs. Rivera.” Rivera, who is gay, ran down the list of microaggressions conveyed through that one short phrase, which assumed he is straight, he is married, and his female spouse is not also a doctor.

“Do you think that I felt included and felt like I belonged there? Hell no,” he said. “It insulted me because they hired me specifically for my microaggression work, and then I was treated with a microaggression in the very same breath.”

What Is a Microaggression?

Rivera gave a brief explanation of the term “microaggression,” which is trending now but has its roots in the 1970s. Chester Pierce, a Black, Harvard-trained psychologist, coined the term after conducting research on the depiction of Black people in primetime television commercials. If Black people appeared at all, they were portrayed as background characters there for comic relief, service work, or caretaking. Pierce defined microaggressions as covert insults from white people to Black people that accumulate with “a pervasive effect to the stability and peace of the world.”

Derald Wing Sue, counseling psychology professor at Columbia University, revived the term in 2006, expanding the definition beyond just Black and white to include the many different groups who are “othered” through the subtle actions of the majority. Rivera, who has worked with Sue since 2006 and considers him a mentor, said they define microaggressions as “brief and commonplace verbal, behavioral, or environmental indignities that communicate hostility, derogation, negative slight or insult towards anybody of a marginalized or oppressed group.” A modern-day example is gendered bathrooms, which Rivera said send a subtle message to trans and nonbinary people that they do not belong in society.

“Every main system in this country has microaggressions embedded in it, because they were founded on systemic oppression,” he said. Those systems won’t be dismantled anytime soon, he added, so it’s imperative that people broaden their education about microaggressions to try to eliminate them from daily life.

Marcus agreed, saying the purpose of her book is to invite everyone to the table — especially men in leadership positions — to talk about the issues, foster understanding, and ultimately change behavior and culture. Trained as marketers, the co-authors wanted to put concrete language behind the sometimes vague notions associated with microaggressions.

“It’s not about cancel culture,” she said. “We spend a lot of time really trying to bring men, bring leaders into the conversation. It’s not about calling you out, but rather inviting you in. One of the things we say, just as a general rule of thumb, is: What you’re about to say to a Black woman, would you say to a white man?”

Rivera shared four steps for counteracting microaggressions that were laid out in Sue’s recent book, Microintervention Strategies: What You Can Do to Disarm and Dismantle Individual and Systemic Racism and Bias. The steps are as follows:

Creary, Marcus, and Rivera emphasized that eliminating microaggressions is a slow journey and not an overnight process. But with dedication, diligence, and heightened awareness, everyone can do a better job of making others feel seen, heard, and valued at work and in the larger community.