The Niger Delta Development Commission (NDDC) says it is making plans to run its post-graduate scholarship programmes in-country, especially in the universities in the Niger Delta region, said Efiong Akwa, the interim administrator. 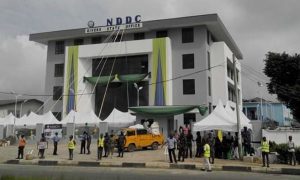 He did not give reasons for the commission’s new thinking. Years-to-date, the post-graduate scholarship project mainly to foreign universities had been an absolute cash syphoning pipe for some NDDC’s top officials and those involved with selecting the benefitting candidates, as they gained illicitly from the scheme. In the same vein, cases abound where the scholarships monies were not sent on time to the foreign universities leading to the students often sent out of campus – finding themselves stranded abroad.

Meanwhile, the University of Port Harcourt (UNIPORT) led by Stephen Okodudu, its acting vice chancellor, a professor, at the Commission’s permanent headquarters in Port Harcourt, has asked it the NDDC to build another mega-hostel for the institution. The commission had in about 2010 to 2012 built a 522-bed hostel for the university.

Okodudu particularly appealed to the NDDC to assist it to ease the pressure of accommodation by building another hostel for them. “The University of Port Harcourt is supposed to be one of the beneficiaries of your intervention efforts as a commission. We do have a robust relationship with the NDDC; but the presence of the commission in the university is not up to what we expect,” the university boss said.

However, over 10 years after, most of the hostels are in different stages of dilapidation, while others are yet to be fully completed.

But Akwa has decried the current dilapidation of the NDDC hostels – from UNIPORT, IMSU, UNIBEN, RSU to MOUA – the story reverberates – of crumbling edifices in the oil region’s tertiary institutions. He particularly asked the universities authorities to take responsibility for management and maintenance of the facilities.

“When we deliver a project and hand over to an institution or community, we also hand over the responsibility of maintaining and managing the project. It is unfortunate that most Nigerian managers don’t take issues of maintaining government facilities seriously. It is regrettable that the university (UNIPORT) has not effectively managed the hostel for the use of students,” the NDDC boss lamented.

He advised the university to carry out remedial works on the hostel that has been handed over to it, to encourage the commission to do more for them.

On the request by the UNIPORT vice chancellor for another hostel in the university, Akwa promised to assist in elevating the educational institutions in the Niger Delta region to make them suitable for the post-graduate programmes.

He observed that in an era of Covid-19 pandemic, it was necessary to assist universities to properly and comfortably accommodate students, in order to ensure sufficient provision for social distancing in the hostels.

He advised Okodudu to formally articulate his request, for appropriate budgetary provisions and presentation to the National Assembly. The request can only be captured in NDDC’s 2022 budgeting. He expressed confidence that the National Assembly would be willing to accommodate the request, since the project would impact on the quality of the learning environment, as well as the welfare of students.

Akwa noted that University of Port Harcourt was playing a crucial role in the South-South region’s economy; as it “has done a whole lot of work in research, engineering and other disciplines, providing data and baseline studies for the good of our country.”