By Adeola Ajakaiye, in Kano
The management of the over 32 years old Nigeria Deposit Insurance Corporation (NDIC), appearing at the Kano International Trade Fair, has listed its claims payment credentials to both individual and corporate insured and uninsured depositors running into tens of billions of naira who were affected by the closure of some commercial banks in the country as helping to provide strong support for financial system stability in the country’s economy. 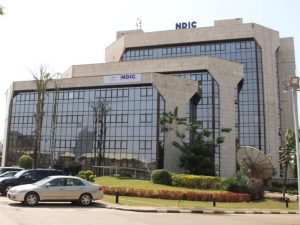 “While also protecting depositors by providing an orderly means of resolution and reimbursement in the event of bank failure, suffice me to state that from inception till date, NDIC has been living up to its mandate and public policy objectives of contributing to financial system stability,” said Bello Hassan, managing director and chief executive officer of the corporation said at the fair.

The corporation said it has paid about N102 billion as uninsured claims to both individuals and corporate bodies that were affected by the closure of some commercial banks in the country since it was established. It also said it paid a cumulative amount of about N11.8 billion as insured claims to about 535,815 depositors of the closed banks across the country, from the day when it was established to the 30th of June, this year.
Bello Hassan, chief executive officer of the corporation, stated that the payment of the claims was carried out in line with the mandate of the organisation which was primarily geared at ensuring financial system stability in the country.
Hassan made the disclosure as he addressed participants at the NDIC’s Special Day, at the ongoing 42nd Kano International Trade Fair, revealing that in addition, the organisation paid about N6.16 billion to 1,955 creditors and shareholders of the closed banks, within the period.
With this development, the corporation had made full payment to all insured and uninsured depositors of 18 commercial banks, and this implies that all depositors of the affected banks who presented themselves for claims had been settled, he highlighted.
“NDIC was established in 1989 as a statutory agency of government with four broad mandates of Deposit Guarantee, Bank Supervision, Distress Resolution, and Bank Liquidation. With the primary public policy objectives of contributing to financial system stability by making incidences of bank run less likely.
“A total cumulative amount of N11.76 billion was paid as insured sums to 535,815 depositors of closed banks, while a total of N101.666 billion had been paid as uninsured claims as of 30th June 2021. In addition, a total of N6.159 billion had been paid as liquidation dividend to 1,955 creditors and shareholders of the closed banks,” he explained.
Hassan assured that the regulatory organisation would continue to strive for a sound, safe and stable financial system which is pivotal for sustainable economic growth.
In this regard, he added that the corporation has been promoting innovations in the financial system by extending deposit insurance cover to Microfinance Banks, Primary Mortgage Banks, Non-Interest Banks, subscribers of Mobile Money Operators, and also to recently licensed Payment Service Banks (PSBs), in order to engender confidence in the financial system.
“Meanwhile, for the convenience and to facilitate access of our depositors and stakeholders, the corporation’s website was activated and [is] constantly monitored to enable depositors and other claimants of closed banks and banks in-liquidation to remotely file and process their claims.
“Depositors and other claimants are urged to continue to avail themselves of this opportunity to file their claims by visiting the ‘Claim Page’ on the NDIC website (www.ndic.gov.ng” he further explained.
He advised bank customers using Automatic Teller Machine (ATM) to always be vigilant and be more cyber aware, and ensure that they do not disclose their ATM details and other sensitive bank account details, and do not patronize Ponzi schemes and illegal fund managers, otherwise known as ‘Wonder Banks’.
He hinted that the mentioned groups could dupe unsuspecting members of the public of their hard earned money, as such entities are not licensed by the CBN as deposit-taking institutions and are, therefore, not covered by the NDIC.
Businessamlive Website Stats