Team negotiators may achieve higher joint gains when they first discuss superordinate goals that either team can’t achieve without the help of the other.

The higher the stakes, the more likely a negotiation is conducted by two teams rather than two individuals. Just think about corporate mergers and acquisitions, law making in government or international trade agreements. All these types of negotiations require varied expertise with multiple people on both sides of the table. Yet, most research on negotiations tends to focus on individual negotiators rather than teams which makes it difficult to extrapolate these insights to team-on-team negotiations. Perhaps the most profound difference between the settings is that two teams tend to be more competitive than two solo negotiators.

There are several reasons why two teams are more competitive in their negotiation approach. For starters, teams prioritise the needs of their ingroup members over those of the outgroup. Second, teams provide a shield of anonymity for individual team members, emboldening them to use more aggressive tactics. Third, interactions between teams make “us vs. them” boundaries salient, which then activate beliefs that the other side is deceitful and competitive.

Dynamics like these cause teams to trust each other less than individual negotiators do and exhibit greater competition, especially when resources are perceived to be scarce. Moreover, prior research showed that negotiators trust the other team less than the individuals within it. This happens because we see variation in trustworthiness among individuals, but negative beliefs about teams leads us to focus on the member who best fits this schema: the least trustworthy individual. These different perceptions of teams vs. individuals are highly consequential because this research found that for every scale unit decrease in team trust, the odds of a costly impasse increase by a factor of 23!

A key question in team vs. team negotiations is therefore how to facilitate trust and decrease the competition that so often leads to low-quality negotiation outcomes. Our recent research examined this question and suggests that teams should carefully select the topics of their pre-negotiation conversations. Specifically, we propose that teams build more trust and positive interdependence when they engage in a more structured joint dialogue in which they talk about the superordinate goals they both hope to accomplish but cannot attain by themselves.

Critically, such a dialogue encourages the parties to recognise how they can be interdependent in positive ways that enable both to achieve more of the outcomes they desire. Such a realisation can help the parties build trust. This, in turn, makes it easier to rely more on collaborative strategies involving questions and answers, rather than competitive strategies in a bid to exercise dominance and obtain concessions from the other side. 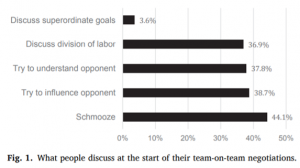 Instead, the most common tactic (44 percent) was “schmoozing,” a form of chit-chat that involves talking about personal or background issues unrelated to the negotiation at hand. Other common tactics reported by our respondents included trying to influence (39 percent) or understand their opponent (38 percent).

Some research suggests that the self-disclosure involved in pre-negotiation schmoozing can lead to greater cooperation because it promotes attraction, liking and positive mood. However, for various reasons, it may be insufficient and impractical to promote trust between teams.

This is a problem as low trust may motivate team members to withhold information and adopt a more competitive negotiation strategy to avoid being taken advantage of. This stands in contrast with the collaboration that is required to make mutually beneficial trade-offs and negotiate higher joint gain.

Structured joint dialogues at the start

We conducted a series of studies to test the idea that jointly structured dialogues between both teams can help promote trust and thereby increase the reliance on collaborative strategies (vs. competitive ones) and high-quality joint outcomes.

In one study, we asked 284 MBA students to participate in a negotiation concerning the syndication of a television show. The parties represented either a buyer or a seller and negotiated four issues. Price was the only issue where one party’s loss was the other’s gain. The other issues, including an agreement to produce future seasons that would benefit both parties, set the stage for give and take.

In another study, we tested the boundaries of these dialogues. Our study participants were 582 MBA students. They either represented either a team of directors or a team of producers who had to negotiate seven issues associated with the production of a film.

Superordinate goal dialogues were only effective in increasing joint gain when they were held between teams. In other words, it is important that these dialogues provide insight into whether the other party also hopes to accomplish the same goals. Finally, we found that these effects were robust among teams that did not know each other and those who did.

In a final study, we contrasted superordinate goal dialogues with schmoozing and analysed the negotiation transcriptions to better understand what these teams talked about. We found that negotiators who discussed superordinate goals with the other team – as opposed to just chit-chatting – again relied on more collaborative than competitive strategies. Moreover, the transcript analyses showed superordinate goal dialogues were most effective in promoting trust, collaboration and joint gain when they focused on fair treatment during the negotiation and a fair allocation of the resources after the negotiation. We also noticed that negotiators used more collective frames of reference and disagreed less.

The discussion of superordinate goals has important implications for practitioners because most negotiators have some say in how to structure their negotiation.

Before a negotiation takes place, discussing superordinate goals creates perceptions of positive interdependence by reminding all parties that certain outcomes cannot be achieved by a single party alone. The right time for such contact is when both teams are ready to pursue these goals. The power of a focused dialogue should not be underestimated, as it could enable team negotiations to live up to their full potential.

Roderick Swaab is an INSEAD Professor of Organisational Behaviour and holds the INSEAD Dutch Alumni Fellowship in Leadership, Diversity and Governance. He is also the Academic Director of the PhD Programme at INSEAD.

Robert B. Lount Jr. is a Professor of Management and Human Resources in the Fisher College of Business at The Ohio State University.

Seunghoo Chung is an Assistant Professor of the Department of Management and Marketing at The Hong Kong Polytechnic University.