With the equities market continuing to show a bullish trend so far this week, investors believe the current development might lead up to a consolidation phase in subsequent trading days, which could then lead to a temporal reversal at the end of the week. 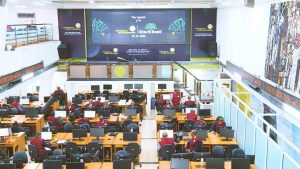 The expectation is, therefore, that the equities market maintains a bullish performance, given current stock prices, which appear to offer attractive investment opportunities to investors.

Today, Wednesday December 16, the market gained 76 basis points, leading the All Share Index to close at 35,493.15 points, while year-to-date return improved to 32.2 per cent and market capitalisation increased by N140 billion to N18.6 trillion.

The NSE 30 Index increased by 0.91 per cent to close at 1,458.51 points as against 1,445.29 points on the previous day. Market turnover closed with a traded volume of 107.99 million units. Nestle and Flour Mills were the key gainers, while Lafarge Africa and Dangote Sugar were the key losers.

The CBN official exchange rate closed at N379 to a dollar, while the street market rate closed at N476 to the dollar and at the Importers’ & Exporters’ (I&E) forex market, the naira weakened by 0.17 per cent as the dollar was quoted at N394.67 as against the last close of N394. However, most participants maintained bids of between N385 and N408.84 per dollar.

FGN bonds secondary market closed on a negative note Wednesday, as the average bond yield across the curve cleared higher by 6 basis points to close at 2.57 per cent, compared to 2.51 per cent on the previous day. Average yields across medium tenor and long tenor of the curve widened by 32 basis points and 11 basis points, respectively, while the average yield across short tenor of the curve remained unchanged. The FGNSB 11-DEC-2021 bond was the best performer with a decline in yield of 6 basis points, while the 26-APR-2029 maturity bond was the worst performer with an increase in yield of 75 basis points.