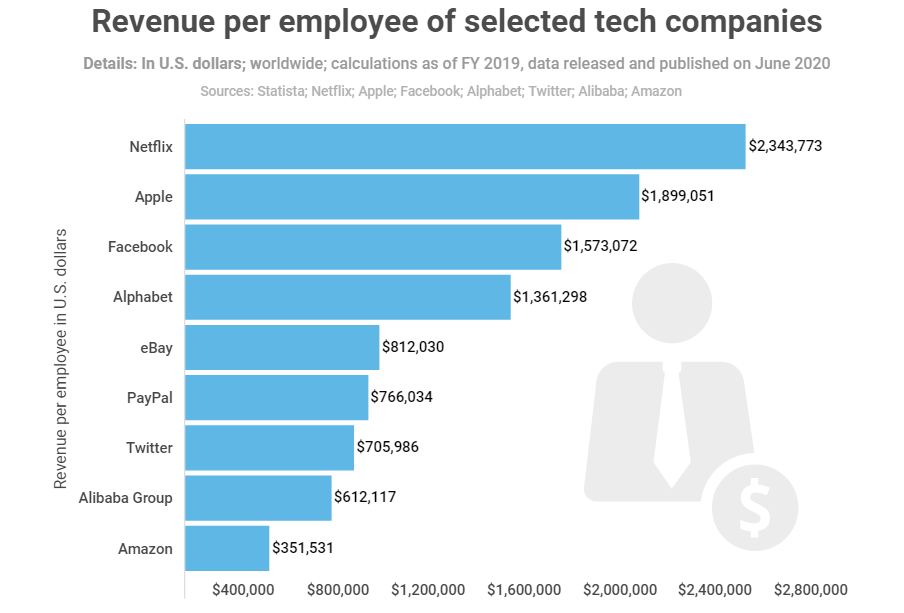 Employees at American streaming giant, Netflix, led those of other tech big names, Apple, Facebook, Alphabet and eBay in revenue generated per head, as they averaged $2,343,773 in the 2019 financial year, according to data accessed by Business A.M.

The data gathered and released during the second quarter of 2020 by BuyShares revealed that the tech startup, which boasts of over 192 million paying subscribers, tops the chart in the tech category, and it is followed by Apple employees who generated $1,899,051 per head.

The data also show that among the analysed tech companies, the social media giant, Facebook, came third with $1,573,072, followed by Alphabet, the parent company to search engine giant, Google, whose employees each generated $1,361,298 in revenue. Fifth on the log was online retail platform, eBay with $812,030, which was followed by PayPal with $766,034; Twitter, $705,986. Chinese based Alibaba Group employees generated $612,117 on the average, and Amazon closed the category for the analysed tech companies with each of its employees generating $351,531.

The information in the data shows that the revenue growth at Netflix was attributed to its steadily growing user base, with the 2019 financial showing that the number of Netflix paying streaming subscribers grew by 797.42 per cent globally between the third quarter of 2011 and the second quarter of 2020.

While the streaming giant could boast of 21.5 million paying subscribers at the close of the third quarter of 2011, by the end of June 2020, the company’s numbers had risen astronomically to 192.95 million.

Netflix is adding new subscribers at an astronomical rate despite growing competition.

The pandemic appears to have come as a blessing in this case with Netflix among companies that have benefitted from the coronavirus pandemic, where it kept millions of people who focused on streaming to pass time at home. Remarkably, pandemic growth should be noticed with care bearing in mind that the company was relishing an organic growth in the number of paid subscribers pre-pandemic. 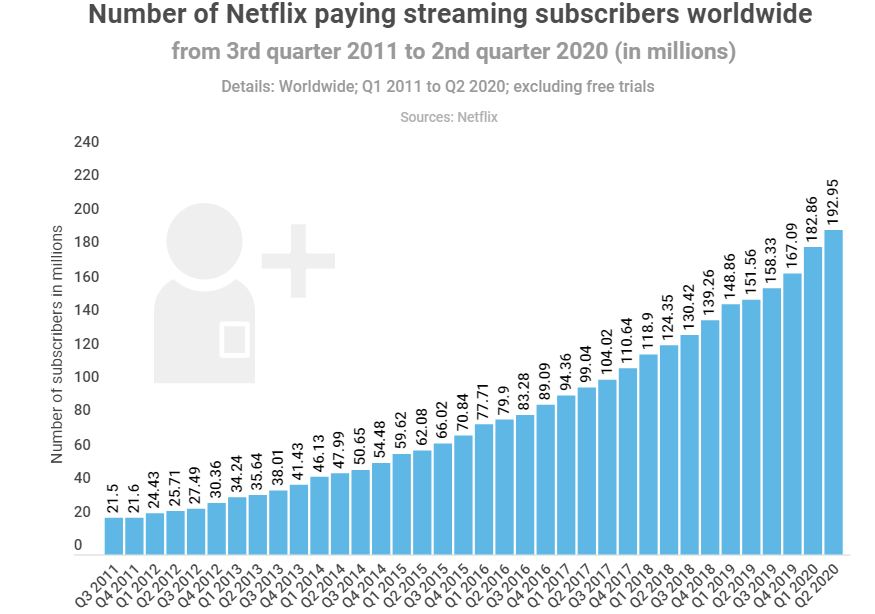 Furthermore, Netflix, unlike its competitors, enjoys a big streamer base since it is available globally. Disney is among Netflix’s major competitors but available in only selected countries. If it was accessible globally, Netflix’s paying subscribers chart would be different. Additionally, with a focus on customer experience, Netflix has continued to dwarf competitors in the industry, the report stated.

The expert opinion on the future of Netflix