The new leadership of the Nigerian chapter of the global United Kingdom Chevening scholars body, Chevening Alunmi Association of Nigeria (CAAN), has outlined key areas it would focus on during the two years of its tenure. 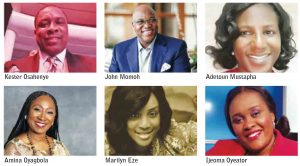 New president, Kester Osahenye, elected with his team at a virtual extra-ordinary general meeting (EGM) about two weeks ago, outline a number of frontline activities that the leadership will be pursuing. He said the executive will be working with the Board of Trustees headed by Channels Television executive chairman, John Momoh to deliver on the following action plans.

• Rejig the work stream programmes of the association especially in the areas of education, health, economy and Corporate Social Responsibility (CSR);

• Continue the work of the association in the area CAAN Budget Roundtable that is executed through on Channels TV and other platforms;

• To give verve to CAAN Mentoring Programme, with a view to seeking industrial or company attachments for CAAN members who are unemployed;

• To pursue more collaborative efforts with the British High Commission and ensure that CAPF is geared towards projects that will give the association edge and visibility.

• In line with the objective of the Chevening scholarship, which was designed to train people for country leadership in different areas, the Osahenye said the leadership will try to be more engaged in political discourse through active participation with a view to influencing policies. “We will work with each stakeholder to ensure we have a voice that is heard nationally,” he said.

In September 2019, at their annual general meeting, the association also elected members to its Board of Trustees, comprising John Momoh, president of Channels Television, was elected chairman; Amina Oyagbola, Adamu Garba, Markie Snomie Idowu and Florence Iheme, were all elected members of the BOT.