Competition in the Pick-up segment in Nigeria is gaining traction with the latest arrival of a Maxus T-60 Pick-up truck model by Mikano International Motors division and one of the fastest growing automotive companies in Nigeria. The T-60 model joins the ZNA (Rich6) and Geely brands in an exclusive partnership with Mikano International. 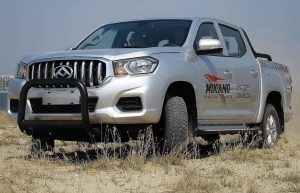 At the launch event at Mikano Motors flagship showroom located on Victoria Island, Ralph Haidar, general manager, stated that “we at Mikano Motors are excited about welcoming the Maxus brand into our fold”, describing Maxus Autos as “a brand with great potential to become a market leader.”

Haidar additionally stated that, like the other brands under Mikano Motors, the Maxus T60 – will be assembled locally at Mikano Motors’ auto- assembly plant located in their Karameh Industrial City in Ogun state.

Interestingly, Haidar shared that the Maxus T60 is the only Chinese pick- up vehicle permitted to be sold in European markets like Spain and Italy and also is the first Chinese-manufactured utility pick-up truck to score 5 stars on the Australian ANCAP rating.

He extolled the tried and tested strength, durability and quality of the T60 and announced that they be on sale for the yuletide season from 15.9million naira, till DEC, 31ST 2022.

He added that this warranty and the Maxus brand legacy has led to impressive pre- launch sales figures, stating that “over 150 units had already been sold to state governments and private sector fleet purchases”.

According to Mbonu, the T-60 is the first of many remarkable vehicles to expect from the Maxus brand, going further to state that the Maxus brand embodies “technology, innovation and transformation, continually working to provide top- of- the line auto products and mobility services”.

Following the official reveal in the Mikano Motors showroom, guests, including Nollywood stars, Jemima Osunde and Akah Nnanni and car enthusiasts, Ladi Okunola of SuperCars of Nigeria, Akpovire Okugbere of Car Continent and Dionette Ezimorah of RideWith Miee as well as esteemed members of the press, were chauffeured to the site of the test drive activity on the shores of the prestigious Eko Atlantic City.

Born in 1896, Maxus Autos epitomises the positive benefits of a British heritage, having begun in the UK in 1896 under the ‘Leyland’ marque with the production of commercial vehicles.

Subsequently, the company expanded its line-up to include passenger vehicles and a wider array of commercial vehicles such as buses, delivery vans, etc. By then, the name had evolved to Leyland Daf Vans (LDV)’, through mergers.

LDV-Maxus has become one of Europe’s most recognizable and reliable brands for commercial vehicles and in 2010, the brand was acquired by China’s largest automaker, SAIC Motors- a Fortune 500 company which owns several of the largest auto brands in the world’s largest automotive market- China,. SAIC also has long term joint venture partnerships with Volkswagen (Volkswagen, Skoda, Audi) and General Motors (Buick, Chevrolet, Cadillac).

With the powerful global support from SAIC, the Maxus brand is a success story across Europe, Asia, the Middle East, Africa, and many others.

The brand retains the LDV-Maxus name for the UK, Australian and New Zealand markets where it remains the top selling Chinese automotive brand.

In Africa, the Maxus brand is already making waves, most especially in Ivory Coast where it has gained vast popularity. Now, Nigerians are set to enjoy the durability and reliability the mid- size pickup truck with advanced technology and an intelligent operating system offers, for their personal and business needs.