For many decades Nigeria’s agricultural practices have largely been subsistence, carried out by farmers in the rural areas on small holder farms, with production at low levels in quality and in quantity. In the last few years since President Muhammadu Buhari came into office, his government has poured billions of naira into agriculture and has made it the cornerstone of its economic diversification efforts. Yet, Nigeria has found itself with the twin embarrassing positions as a net food importer and a country that has had to go to the ECOWAS reserve to borrow food. In this piece on promoting the value of technology in harnessing agriculture development in Nigeria, ONOME AMUGE writes that after decades, and with a large population, the country’s agriculture will continue to suffer without technology.

On December 29, 2020, President Muhammadu Buhari reiterated his directive to the Central Bank of Nigeria (CBN) not to grant foreign exchange for food importation, stating that his administration would in 2021, address the rising food inflation in the country. 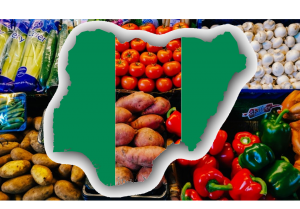 The president also stated that the country must consume what it produces, a policy the government has been pursuing through its economic diversification  programmes aimed at mitigating the economic turbulence facing the country and encouraging self-sufficiency.

The prevailing economic situation in Nigeria, he explained, has prompted the need for a diversification to resolve the economic challenges hitting the country in the face as the oil industry has been wobbled by the covid-19 pandemic while the country is being forced to produce 1.5 million barrels a day as against its 2.3 million capacity amid a high technical production cost.

On this note, the president emphasised the relevance of agriculture in the efforts to restore the economy and enjoined citizens and private sector to support the government’s efforts toward economic sustainability by prioritising agriculture.

Prior to this, the Nigerian Bureau of Statistics (NBS), in its latest assessment of the Nigerian agricultural sector, indicated that agriculture contributed 30.77 per cent to the overall gross domestic product (GDP) of the country in Q3 2020, up from the 24.65 per cent recorded in the third quarter of 2019. The sector’s quarter-on-quarter growth also saw a 36.45 per cent rise.

The report brings to fore the realisation that the agriculture sector plays a relevant role in the country’s economic sustenance.

However, researches cantered around agriculture in Nigeria confirm that its operation and practices are characterised by low yields that makes returns per hectare way below what is obtained in developed climes.

Various reports on the agriculture sector have also confirmed that Nigeria, despite its production potentials, is facing two key gaps in agriculture today – an inability to meet domestic food requirements, and an inability to export at quality levels required for market success.

The Food and Agriculture Organisation (FAO) in one of its researches on the Nigerian agriculture system, stated that majority of the farmers in Nigeria still make use of crude farming tools such as hoes, machetes, diggers and others, while less than 10 per cent engage in mechanised agricultural system in the country.

According to the FAO, Nigerian rural communities, the hub of agricultural activities in terms of crop and livestock production for the populace, have been grossly underutilised and these have unfavourable effects on the rapid agricultural transformation of the rural areas.

Commenting on this, Samson Ogbole, co-founder, PS Nutraceuticals, an agri-tech company based in Lagos, warned that if Nigerian farmers continue to operate using hoes and cutlasses, actualising food sustenance will be an impossible task as the country will still be affected by low supply of farm products, poor efficiency and sustenance of crops and Nigeria will be left with no other option than to depend on other nations for food.

He added that without adequate mechanised farming, there is no way Nigeria can achieve food security, use its agricultural products for industrial purposes and bolster its food export capacity.

Kola Masha, managing director, Babban Gona, an agriculture enterprise, while speaking about how climate change has been a major problem to Nigerian farmers, explained that weather conditions have become less predictable than they used to be. As a result, many farmers become confused regarding when to plant or when they could apply their fertilisers. He assured that with technology, farmers can be assisted in mitigating the risk. One of the ways technology can help, he added, is the provision of drought tolerant seeds. These seeds, he noted further, have proved relevant in developed countries of the world because they are easily adaptable to climate change and their growth and productivity remains stabilised as a result.

Babatunde Obrimah, chief operating officer of Fintech Association of Nigeria, in his remark, noted that developing the agriculture sector goes beyond giving funds to small-holder farmers, but that it encompasses the entire agricultural value chain; from fertilizer inputs to the quality of seeds planted, the level of mechanization, the quality of the harvest, the quality of storage, and logistics.

He also noted that Nigeria’s manual approach to agriculture has kept yields below full capacity. Nigeria is no exception, with limited adoption of technologies being one factor for the country’s challenges of rising food imports and declining levels of national food self-sufficiency.

Obrimah intimated that just as science and technology have played their roles in transforming the telecommunication and banking sectors, as well as other sectors, it is also a backbone to achieving the long-term goal of sustaining the agricultural sector of the economy.

Promise Amahah, a Nigerian agripreneur and founder, Nigerian Young Farmers Network, commended the government for initiating agricultural development schemes such as the Anchor Borrowers’ Programme, which is financed by the Central Bank of Nigeria (CBN).

He however noted that government financed schemes cannot yield positive results if technological advancement is not brought to the fore in the agricultural sector. The Nigerian government, he said, is notorious for investing huge amounts of money on agricultural projects that are not accounted for.

Amahah suggested that the implementation of data gathering technology devices in monitoring how agriculture funds are being disbursed and utilised will help promote accountability in the agriculture sector.

He also assured that the technology in agriculture will attract young Nigerians into embracing and investing in agriculture, which is otherwise, seen as an unattractive traditional vocation.

Abiodun Olaniyi, executive director, AgriQuest Africa Network (AQAN), an agribusiness management consultancy firm, posits that agriculture as a self-sufficiency and export commodity in the modern world has gone beyond the era of farmers using crude farm implements like hoe, sickles and cutlasses.

According to him, this is the core reason various government initiatives all aimed at food production and self-sufficiency have not yielded positive results contrary to the giant strides in agricultural revolution recorded in Europe, Asian, United States of America and countries.

He stated that mechanised form of farming that involves the use of advanced technological machines, tools and techniques in crop and animal production is the only way a regular and enhanced supply of farm produce can be assured.

Femi Oke, a Nigerian farmer and chairman, All Farmers Association of Nigeria (South West region), bemoaned the shortage of mechanised farming in Nigeria.

He noted that an average farmer can hardly grade a hectare of farmland with bulldozers, which are being leased for about N80, 000 – N90, 000 per day, an amount many farmers can barely afford.

Oke recommended government partnership with companies and private organisations in the farm machinery production and supply sector, whereby farmers can have their farmlands cultivated using these machines at an affordable rate as this would encourage production.

Adeola Adegoke, president of the Cocoa Farmers Association of Nigeria (CFAN) in his reaction to Nigeria’s relegation from being among the top three highest producing countries in the world to fifth position, stated that for Nigeria to retain its vantage position among the cocoa producing countries of the world, cocoa production has to be brought to life with the help of technology and advanced mechanisation as opposed to the traditional method of farming where tools used by farmers in the 20th century are still used by farmers today.

He also stated that the utilisation of technology will help the cocoa industry establish a database of all the cocoa farmers to provide adequate and accurate information on cocoa farmers which will assist the government, investors and research institutes on cocoa production.

Onyeka Akumah, co-founder and CEO, Farmcrowdy, an agri-tech company, asserted that information and communications technology (ICT) can be used as a direct tool in agricultural production and an indirect tool for empowering farmers to take informed and quality decisions, which will have positive impact on the way agriculture and allied activities are conducted.

The main objective of ICT application, from a development perspective, he added, is that of empowering people through knowledge and increasing the effectiveness of their development efforts through informed decision making and through their capacity to harness science and various forms of knowledge to achieve the objectives of poverty eradication, food security and sustainable development.

This, he explained, would be an effective tool for the very large uneducated populace farmers in the country and also help foster a better understanding of farming practice and marketing among the youths who are eagerly delving into farming today.

Ayodeji Balogun, CEO, AFEX Commodities Exchange, stated that to enhance the efficiency of agriculture, adequate resourcing, not just financial disbursements, should be put into place.

Balogun also confirmed that the opportunities and challenges to be solved is enormous as there is so much that needs to be done, ranging from the seed sector to policies.

He suggested that the Nigerian tech space needs to create a locally adaptable solution to the challenges.

“For agriculture to function properly, it is obvious we need to start involving people who are tech savvy, most especially the younger generation,” he added.

Ndubuisi Ekekwe, founder of First Atlantic Semiconductors & Microelectronics (FASMICRO), an integrated technology-based company, noted that agriculture is no longer a traditional system where the farmer depends on crude implements such as cutlass or hoe for productivity but more of how the farmer can scale his business systems in the agricultural space using technology.

He noted further that with technology, most of the funds and investment programmes the government is spending to boost agriculture will actually go into agricultural processing itself and not the mechanics of helping farmers, which is where so much money is spent, without generating the needed result.

Ekwekwe, who is also a renowned engineer and inventor, suggested the investment and application of technology devices, such as Zenvus, which is an electronic sensor that is pertinent to agriculture development.

Zenvus, he explained, is a data gathering equipment  that is put in the soil to collect information, like temperature, moisture, humidity, electro-conductivity of the soil and also give indications about the ingredients the crops are lacking, or a pest or disease that are attacking them.

He added that based on that information, the farmer can effectively monitor his crop and easily say how, when and the best possible things he can do to improve yield in the farm.

Ekwekwe also enjoined the government to create public-private partnerships especially with agri-tech companies, as this can go a long way in helping to provide technology-powered equipment at subsidised rates to the farmers.