Nigeria earned a total of N275.12 billion from value added tax (VAT) in the third quarter of this year, figures released by the National Bureau of Statistics have revealed. 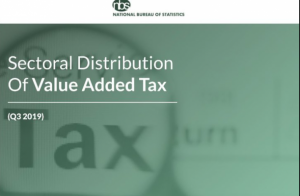 The NBS in its VAT report which was released on Monday said the N275.12 billion earnings represents a decline of N36.82 billion when compared with the N311.94 billion generated in the second quarter.

The report stated that during the period, professional services generated the highest amount of VAT with N32.09 billion.

This is closely followed by other manufacturing which generated N30.27 billion; while commercial and trading activities generated N14.47 billion.

It added that mining generated the least and it was closely  followed by textile and garment industry,  pharmaceutical, soaps and toiletries with N44.30 million, N253.83 million and N291.06 million generated respectively