Scarcity of rice is imminent in Nigeria next year with resultant hike in prices unless farmers take appropriate measures to replant the commodity after the recent flood mayhem in some states including Kebbi, Jigawa, Anambra and Kogi, which destroyed farmlands. 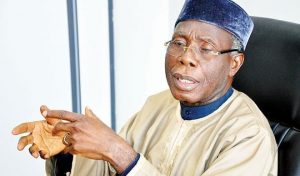 Nigeria declared a national disaster last month after severe flooding across 10 states left about 100 people dead, a situation described by the country’s National Emergency Management Agency (NEMA) as the worst flooding in six years.
Some rice-producing states, in collaboration with the private sector, invested massively in local production as part of their strategic response to the Nigeria’s  government push to achieve self-sufficiency in rice by 2020, diversify the economy and create jobs.
These investments are being threatened by floods, which have washed away rice farms across the country.
Rice consumption in Nigeria has grown over the last two to three decades and this has raised its profile as one of the leading staples in the country. Over the years its importation from Thailand, Indonesia and other south-east Asian countries had left a drain pipe on Nigeria’s foreign exchange reserves forcing the government to ban its importation and pursue massive local farming of the produce.
The average price of one kilogramme of imported high quality rice increased by 1.14 percent month-on-month to N375.02 in August from N370.79 in July, and decreased -2.43 percent year-on-year, data from the National Bureau of Statistics showed.
Speaking on this, Audu Ogbeh, minister of agriculture and rural development, said the flood, which affected some major rice producing states, including Kebbi, Jigawa, Anambra and Kogi, portends risk of scarcity of rice in the country if not addressed.
Ogbeh, who was commissioning the National Agricultural Seed Council (NASC) Molecular Facility in Abuja on Thursday in commemoration of the 2018 seed fair and Farmer’s field day, advised farmers to use water that recedes from the flood to replant rice to avoid shortage of the crop next year.
Ogbeh said: “We have to find a way to reach out to farmers who have lost their crops because in places like Jigawa, Kebbi, Anambra and Kogi many farmers lost everything they planted.
“New varieties of rice are being produced at the National Agricultural Seed Council, the Faro 66 and 67 which are flood tolerant, we hope to get them into the field in large quantity for farmers to plant in the near future.
“We are also hoping that as soon as the rain recedes we encourage farmers to replant so that the residual moisture in the soil plus irrigation can give up another crop maybe by the end of December or early January, otherwise we may be in serious trouble for millet, rice, maize and sorghum” Ogbe feared.
For instance, about 20 percent of the 110 hectares of rice field at the Leventis Farm in Agenebode, Edo State, have been washed away by flood. The farm, cultivated by farmers with the state government’s support, under the FADAMA III financing project, was said to have been submerged by floods from the Niger River.
At least, 21,000 hectares (51, 892 acres) with 168,000 metric tonnes un-harvested rice have also been washed away in the past month in Kebbi, one of Nigeria’s main rice-growing states.
The state chairman of the Rice Farmers Association of Nigeria (RIFAN), Mohammed Sahabi, had said similar damage was reported by farmers in three other northern states, namely Niger, Kano and Katsina.
Similarly, about 7,000 registered members of RIFAN in Adamawa State are said to be assessing the extent of damage on their farms by floods, which hit the state. With some farmlands in various local government areas especially those along the bank of River Benue submerged, the Association was emphatic that the earlier predicted bumper harvest in the state was under threat.
Reported By Shalom Anthony