Tens of millions of Nigerians, already harried by the worst inflation in history, could be further threatened by starvation from food shortage from Africa’s drought, which has reached far beyond the Horn of Africa, a report by ForAfrika, has stated. 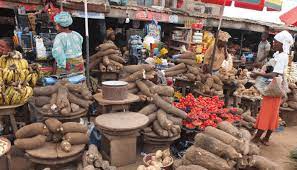 The largest indigenous African non-governmental organisation, also said hundreds of thousands of people could die of starvation in the continent if the extent of the continent’s food security crisis was not recognised.

The Food and Agriculture Organisation (FOA) and the African Union (AU) estimate that the food crisis has affected 346 million people, the result of a number of factors occurring at once, including: conflict, drought, flooding, Covid-19 pandemic and rising prices due to the war in Ukraine.
Some nutritionists and development analysts told Business A.M. that the sordid continental situation puts Nigeria on serious notice, for a country grappling with a record food inflation which surged to 20.6 percent in June 2022 from 19.5 percent in May.
Costs of staple foods such as bread, cereals, potatoes, yams, meat, fish, oil and fat, and wine have been rising astronomically across the country quarter-on-quarter. The analysts blamed insurgency for these price hiccups.
While food insecurity in Africa is driven by recurring environmental, political and economic instability, and a concomitant breakdown in community support systems, Russia’s invasion of Ukraine has exacerbated the situation by disrupting the global supply of wheat and other staples such as cooking oil, pushing up prices.
Isak Pretorius, chief executive officer, ForAfrika, said the food crisis – and rising malnutrition – affecting the African continent is real and pressing. “I urge people of conscience to rally behind the people of Africa,” he said.
Killen Otieno, ForAfrika’s chief of operations, said, in contrast to what is often reported, drought in Africa extends far beyond the Horn of Africa, and hundreds of thousands of people across Central and Southern Africa are at risk as a result of not enough food being produced in the region this year.
He said urgent aid was needed to prevent parts of the Horn of Africa region that encompasses Ethiopia, Eritrea, Somalia, Somaliland and Djibouti from sliding into famine. In addition, drought and heat stress are evident as far south as north-western Namibia, south-western Angola, northern and central Mozambique, Malawi and Madagascar.
Africa is home to low-income countries that are at risk of food insecurity, with the Ukraine war amplifying existing strains caused by two years of Covid-19 pandemic. With Russia and Ukraine being some of the world’s leading fertiliser exporters, the crisis could deepen and stretch – impacting food production, availability and access, especially for the most vulnerable households.
The food security crisis across the continent is worsening, yet only 30 percent to 40 percent of the continent’s arable land is used to grow food, and over the past 40 years the continent of over 1.2 billion people has been steadily losing its share of the global food market.
For Africa to regain its place in world food systems, governments across the continent need to invest in agriculture and in agricultural technologies that help farmers improve their rate of production and adapt to and mitigate against the effects of climate change, ForAfrika says. The continent has the potential, in fact, to exceed its highest previous production levels, producing enough to feed its population of 1.2 billion and to export food.
Despite contributing the least to climate change, Africa is most vulnerable to the menace. A large contributing factor to this situation is that most African agriculture (95 percent, according to the African Development Bank) is rain-fed and that agriculture employs a large percentage of the overall population.
The recent record temperatures experienced across Europe show climate change is having real effects on populations worldwide. While this phenomenon is a large threat to Africa’s future sustainability, if the continent’s governments work together, climate change could also provide a catalyst for the continent to use its resources to plot a new path to a better future for its people, and to achieve the targets of the United Nations’ Sustainable Development Goals.
Fred Mutenyo, ForAfrika’s programmes manager for Uganda, said African governments have a role to play in ensuring that a situation like the one now faced by so many countries across the continent is not repeated. Uganda is host to more refugees than any other African country, many of them displaced due to the drought in the Horn of Africa.
Boosting food security is one of ForAfrika’s priorities, especially as getting this right can improve people’s lives in a variety of ways. If people can produce a surplus of food, they can improve their own nutrition, and they can earn money by selling the food, which can be used to improve their education, health and general well-being.
ForAfrika supports household food production by teaching intensive agronomic practices that boost production volumes and nutrition, providing farmers with good seed stock, and promoting climate-smart technology that helps farmers mitigate against and adapt to the effects of climate change. These climate-smart technologies include solar-powered irrigation, using seeds known for good germination rates, and a variety of water and soil conservation techniques. ForAfrika assisted more than 1.2 million people in South Sudan in 2021, and more than 903 000 in Angola, 50 000 in Uganda, 400 000 in Mozambique, 166 300 in South Africa and 500 in Rwanda in the same year. This assistance includes working with people to improve their ability to feed themselves.
Businessamlive Website Stats