The report indicates that as at end Q1 2017 average data speed in the country stood at 3.9mbps as against global standards, which most analysts attributed to the current low investment in the broadband segment of the country’s telecommunications industry.

According to the latest data released by the Nigeria Communications Commission (NCC), the industry regulator, Internet subscriptions stood at 90.1 million in April, representing a year-on-year contraction of 1.2%.

Broadband penetration in Nigeria is equally estimated at 21%, representing a density of 49% of an estimated 185 million population.

The development specifically indicates that Nigeria may fall behind the rest of the world in digitization and the Internet of Things.

Kenya, a sub-Saharan African country like Nigeria, is said to have the world’s 14th fastest mobile Internet speed, according to the Akamai report, which collected data from more than 130 countries. 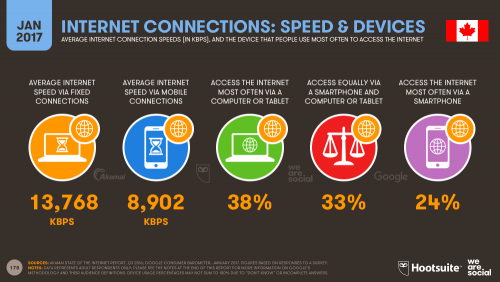 At 13.7 megabits per second, Kenya’s average data connection speed in the first quarter of 2017 was almost twice as fast as the global average. Kenya also beats the United States, ranked 28th with an average speed of 10.7 mbps, and South Korea, home to the fastest average speed in fixed Internet connection.

“As much as 88% of Kenya’s population accesses the Internet through their phones, thanks to cheaper data plans and the ubiquitous use of mobile money platforms like M-Pesa,” the report noted.

Stakeholders in the industry have therefore raised concerns that unless there are increased investments recorded within the broadband segment of Nigeria’s telecommunications industry the segment may not be able to repeat the successes recorded in mobile telephony.

The slow pace of broadband development in Nigeria is known to be impacting negatively on growth both in service and the real sector as most businesses now drive their operations on the back of data.

Given the persistent macroeconomic challenges in Nigeria, stakeholders are already expressing doubt that Nigeria may not hit its broadband penetration target of 30% over the next 18 months.

The slow growth in broadband development is due to what stakeholders described as volatility in Nigeria’s foreign exchange market over the past eight quarters as the industry depends heavily on imported infrastructure.

The operating costs for telecommunications operators have spiked and the inflow of fresh investment has been minimal.

The huge gap in investment requirement for growth in the broadband segment is said to be slowing down the rate at which potential customers come on board the service thus denying operators of improved income although many Nigerians complain of expensive data plan amidst slower data speed.

According to data gleaned from the NCC, mobile network operator MTN, in April  2017 emerged as the leading operator in Nigeria  in terms of Internet subscriptions, accounting for 34% of the total, while Globacom was the second largest with a 30% market share. Meanwhile, Etisalat had the lowest share with only 12.7 million Internet subscribers.