Nigeria, with a total debt stock now in excess of $103.31 billion or N42.84 trillion as of June 2022, leads some 20-odd African countries now at risk of over-borrowing or on verge of excessive debt by this year (2022), as risk of over-borrowing by African governments came up for assessment by some Africa’s international economists.

In Nigeria, the business climate has remained gloomy and uncertain since 2020. From a lack of reforms to limited infrastructure, obstacles to growth are numerous in the country, which also posts as Africa’s and world’s largest population of extremely poor people. Companies in the country, suffering from falling capacity utilisation, have been calling out to the Nigerian federal government and authorities in charge of the sector.

On the continental scale, Africa’s average inflation rate is expected to reach 13.5 percent this year (2022) while 20 of its countries would slump into the threshold of excessive debt. 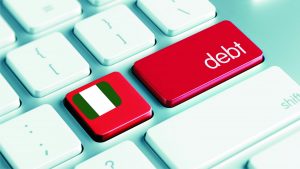 To solve this issue, experts are urging states to step up measures to increase their revenues. International economists Magaye Gaye from Dakar, and Lubinda Haabazoka from the University of Zambia, said Nigeria, though one of the most industrialised economies on the African continent, sadly faces enormous challenges in terms of electricity supply, infrastructure, and access to finance.

“All these are crippling start-ups and businesses,” they said at a forum on industrialization in the next decade, which provided an opportunity to look for solutions to this plight.

They said, though Africa has seen a leap forward in internet bandwidth capacity over a ten-year span by 50-fold, and the number of cell phone subscribers doubled, yet large swathes of the continent lack access to network coverage. In Kigali, experts have been working on the subject.

Today, sub-Saharan Africa’s debt stands at about 60 percent of its GDP, while 40 percent of countries in the region are experiencing double-digit inflation. The cost of essential food is one of the factors driving this spike. Fifty percent of staples making up the consumer basket are imported.

But this is not so with Rwanda, which is showcasing a shining example, displaying varied investment opportunities. Foreign investors continue to flock to Rwanda, bringing numerous investments into the country. With an economy seen as one of the world’s fastest-growing and boasting a business-friendly climate, a burgeoning private sector, and major infrastructure projects, investment in manufacturing is a major focus for Rwanda’s industrial parks.

Today, a number of well-known multinational corporations have set up outfits in Rwanda, such as Volkswagen, Motorola Solutions, Andela, and Radisson Blu Hotel Group.

The first smartphone manufacturing plant in Rwanda was recently built by Mara Phones, while Carnegie Mellon University and other educational institutions have established campuses in Rwanda.

Roughly 54 percent of Rwanda’s working population is employed in agriculture, which produces about 24 percent of the country’s GDP. For example, the Gabiro agro park, a fully irrigated commercial farm of 15,600 hectares, is one of the most promising opportunities in the industry. Another is the Gako beef initiative. Developing a farm of 5,600 hectares to produce high-quality beef for export markets is the primary goal. These have created investments and employment possibilities in agriculture, a feedlot or mill, slaughterhouses, tanneries, or rendering plants may be created.

The industry is characterised by progressive diversification from basic manufacturing to higher value-adding industries. Glass manufacture, e-mobility, and the production of electrical items, packaging materials, wood products, textiles, and apparel all provide significant investment prospects in this area.

For instance, in the glass industry, the goal is to leverage Rwanda’s excellent sand resources to build a flat and a container glass plant for the local and regional markets. The proximity market, which includes 60 million people and more than one million automobiles, is increasing rapidly under the umbrella of e-mobility. 180 million people populate the EAC, which boasts a $3 billion automotive industry.

Additionally, digitalization of the continent was at the heart of the most important internet connectivity event in Kigali.